At the age of 68 and after eight years with Anglo Pacific International Plc, Trade Shipping Manager Jack Dorrington has finally succumbed to retirement. A well-known figurehead in the industry, Jack will be sorely missed as he passes the baton onto his successor, Teresa Connolly. 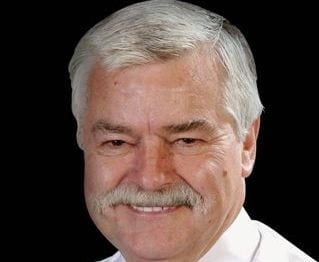 AT the age of 68 and after eight years with Anglo Pacific International Plc, Trade Shipping Manager Jack Dorrington has finally succumbed to retirement. A well-known figurehead in the industry, Jack will be sorely missed as he passes the baton onto his successor, Teresa Connolly.

Joining the Company in 2003, Jack brought a wealth of removals experience with him from stints with Pickfords and TEAM Relocations alongside a sizeable collection of stories from his colourful life. Born in Ware, Hertfordshire, Jack went straight from school into the RAF for eight years before sampling life over the other side of the world running licensed restaurants and hotels in Perth, Sydney and Queensland. He accidentally fell into an Export Manager role on his return to the UK in 1979 and the industry is rather grateful that he did.

Jack comments: “Honestly and genuinely, my time with Anglo Pacific has been one of the best working relationships I have ever had and I’ve enjoyed it tremendously. After staying on probably three years longer than expected, it was time for me to embrace retirement and bid my farewells. I’m now looking forward to busying myself in the garden and taking advantage of our lovely holiday home in the Turkish resort of Fethiye where you’ll find myself and my wife three or four times a year. Of course I’ll miss my colleagues at Anglo Pacific but I’ll carry fond memories with me.”

Stepping into Jack’s shoes is Anglo Pacific’s new Trade Shipping Manager, Teresa Connolly. No stranger to the Company, having originally joined back in 1998, Teresa spent four months working alongside a then semi-retired Jack in 2011 to ensure the smoothest of handovers.

Teresa comments: “Jack had a wonderful rapport with our 500 or so Trade Shipping clients and the ladies especially were very fond of his charming manner. My aim is to simply continue where he left off and, together with the help of my team, maintain close relations with our trade customers and assist them in their need to keep a close eye on quality and costs in this tough climate.”

Have you got other news from the Aussie community in London? Email us at [email protected]