The federal government has come under stern criticism for its asylum seeker policies after Monday’s tragic boat capsize which left two dead. 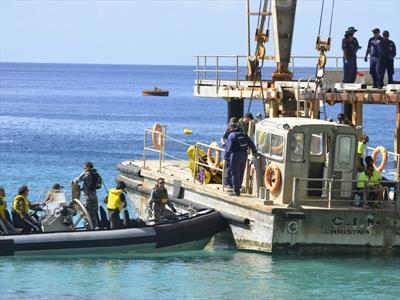 The deaths of two asylum seekers after a boat capsized, and the arrival of two new vessels, have sparked calls for the federal government to change its approach to border security.

The Australian Greens and refugee advocates are calling for a coronial inquest into Monday’s tragedy near Christmas Island, and Independent MP Andrew Wilkie says a new approach is needed to stop the dangerous attempts to reach Australia.

Three others who were injured are being treated in Perth after being airlifted from Christmas Island overnight by the Royal Flying Doctor Service.

Prime Minister Julia Gillard says the deaths are “incredibly distressing” and wants the opposition and Greens to back recommendations made by the Houston expert panel, which include her people-swap plan with Malaysia.

“The thing that is stopping me from bringing it into operation is that unfortunately the leader of the opposition and his team has decided it is in their political interest to see more boats,” Ms Gillard said in Perth on Tuesday.

Opposition Leader Tony Abbott rejected the call, telling reporters in Sydney that when Ms Gillard referred to the Malaysia deal, she was looking for an excuse to do nothing.

“Because the Malaysia people-swap involves just 800 people and just at the moment we’re getting 800 people a week,” he said.

Greens senator Sarah Hanson-Young says the government’s no-advantage rule and offshore processing policies are not preventing people getting on boats.

She wants a coronial inquest and a review of Australia’s boat interception protocols.

“We need to make sure we are doing absolutely everything we can to avoid these tragedies from happening,” she said in Adelaide.

Mr Wilkie said it was yet another “damning indictment of the government’s flawed, irregular immigration policy”.

“This is not a border security problem but a humanitarian challenge,” he said.

“Unless and until there is a sophisticated policy addressing source, first asylum and transit countries, the boats will keep coming.”

Seven people were treated for injuries, with three airlifted to Perth.

They include a six-year-old boy, who nearly drowned, who is in Princess Margaret Hospital for Children.

Royal Perth Hospital is treating two women in their 20s, one of whom is in an advanced stage of pregnancy.

All three suffered injuries relating to water and diesel ingestion but are in a stable condition.

Customs was responding to a call for help made by a passenger on Sunday night.

After two officers boarded the boat on Monday morning, two large waves struck the vessel and it rolled.

Customs officers plucked people from the water, but two, a woman and a boy, were dead, believed drowned.

Australian authorities formally suspended their search at 1700 AEDT on Monday after reports that all passengers had been recovered.

Two more suspected asylum-seeker boats, carrying 105 and 83 people, were intercepted by the Australian navy near Christmas Island on Monday.

“Only a change of government will restore the proven measures of the Howard government,” Mr Morrison said. – AAP