Deadly Taipan snake may have been a pet: catcher

A deadly snake usually only found in western Queensland which bit a NSW teenager on the hand may have been someone's pet, a reptile catcher says. 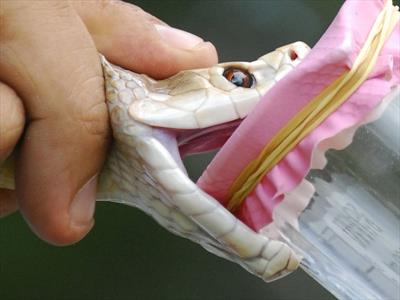 A DEADLY snake usually only found in western Queensland which bit a NSW teenager on the hand may have been someone’s pet, a reptile catcher says.

A 17-year-old boy on Thursday turned up at the emergency unit of Kurri Kurri Hospital, in the State’s Hunter region, with the snake, saying it had bitten him on the left hand.

He remains in a serious but stable condition at Newcastle’s Calvary Mater Hospital.

Police called Barry Martin from Reptile Rescue who identified it as an inland taipan, also known as a fierce snake, one of the most deadly in the world.

“The first thing I said was ‘who owns it?'” Mr Martin told AAP on Thursday.

“I got a big shock because they’re not in this area, that type of snake shouldn’t even be there.

“Ten to 12 years I’ve been catching, and I haven’t seen a taipan in this area.”

The Australian-native species was normally found only in a small area of western Queensland, he added.

Mr Martin said it was hard to track where this particular snake came from, but he believed it may have been kept as a pet.

“Someone’s either caught it out of the wild or someone’s had it for a pet,” he said.

“I’ve got a feeling that someone’s had it as a pet.”

The average adult wouldn’t survive longer than 45 minutes if a bite from a fully-grown inland taipan was left untreated, Mr Martin said.

According to the Australian Reptile Park, it is the most toxic snake in the world but no human deaths caused by the species have been recorded.

The snake remains in Mr Martin’s possession. He hopes it won’t be put down and instead be milked for use in producing antivenom.

Police don’t believe the incident is related to a break-in at Hunter Valley Zoo on Sunday night, when thieves stole four pythons and two alligators.

No taipans were reported stolen from the zoo. – AAP