POLL POSITION | In thousands of cities around the world peaceful gatherings of people protesting corporate greed are being smashed by riot cops. 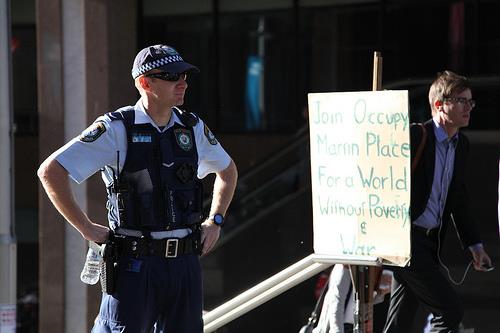 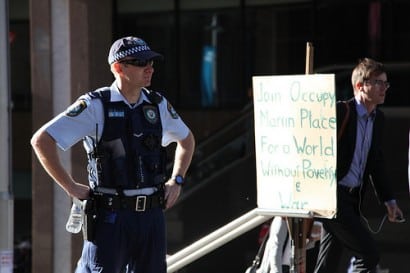 IN thousands of cities around the world peaceful gatherings of people protesting corporate greed are being smashed by riot cops.

Gone are the times we may presume to associate violent policing only with authorities in Syria, the army in Egypt, or the Israeli military in Palestine. Riot police protected by helmets and shields are using batons, tear gas, pepper spray and rubber bullets to disperse crowds in cities the world over.

Earlier this year Canadian based magazine Adbusters put a call out for people to “occupy Wall Street”. On September 17, thousands of people took to the streets of New York, set up camp, and the leaderless global Occupy movement was born.

In a time where we are firing increasing numbers of drones on countries across the Middle East and Asia killing civilians in some backwards attempt to share our supposed democratic political model, the people of the “liberated” West are calling time and asking why corporations are getting more say than the rest of us.
This Occupy movement has reminded us that there are two things police have trouble responding to: humour and peaceful resistance. Both have been abundant in Occupy protests from New York to Sydney, Tokyo to London.

Camps have been set-up in city centres, to “reclaim” space for people to use and enjoy. Tents have been pitched, kitchens have served up hot dinners, library’s have loaned books and magazines, and general assembly meetings have made decisions.

In between workshops on politics and economics, people have juggled, hula-hooped, started the morning with a group yoga session, and ended the day with a game of cricket or soccer.

Far from impeding regular use of the parks, gardens, and city squares they occupy, these camps have encouraged people to enjoy and use the city they live in, and get to know the people they live alongside.

In places often merely part of the rushed journey of the suited city workers during peak hour, ideas are being shared. Big ideas, brave ideas, honest ideas, about what is wrong with where our world is at and how we might go about doing things differently.

These spaces have catered for the needs of protesters, people living homeless, and curious onlookers alike. Yet one after one, in city after city, police move in, often on the orders of local councils to trash camps and destroy belongings, before aggressively arresting and charging peaceful protesters with the inane (“trespass”) to the hypocritical (“assault police”).

Photographs and videos show scenes that would require an adult classification if they were part of a movie.

In Oakland a 24 year old former marine who served in Iraq has a fractured skull after being hit in the head by a police fired projectile (believed to be a tear gas canister).

In New York we saw police using nets to pen young women into a small space before spraying them in the face at close range with pepper spray.

In Melbourne a protester’s teeth were broken, and another now has a black eye as a result of aggressive policing to move protesters out of the city square.

In Sydney a young man ended up with a bloodied nose and many were left sore and bruised after the police raided the camp at 5am last Sunday.

Riot police are being called in to respond to the very opposite of a riot. Police are responding the only way they know how, with violence and force. Their actions are politicising young people who have previously looked up to the police force for their more appropriate roles in policing domestic violence or responding to traffic accidents.

The removal of peaceful people asking for space in the city in which they live and for more say in their country’s politics, is case in point of what many Occupiers are saying is wrong with the current state of play.

Right now in Martin Place where last week there was a flourishing camp full of happy people living and learning together, there now stands a TAB tent ready to help people gamble on a horse race. So we see, Sydney City is happy for Martin Place to be occupied, provided it makes money.

In Australia as in England, we see corporations given more time with our elected political representatives than we could ever get. We see public spaces allowed to be occupied by corporate sponsored events but not by the people who ordinarily live and work in the city. And we see a world where the West has let its feigned democracy being smashed and gassed. All of a sudden ideas have become very dangerous.