Australian Dame Edna Everage has added culinary critic to her long list of talents, after guest judging a special episode of MasterChef for Comic Relief alongside High Commissioner Mike Rann. 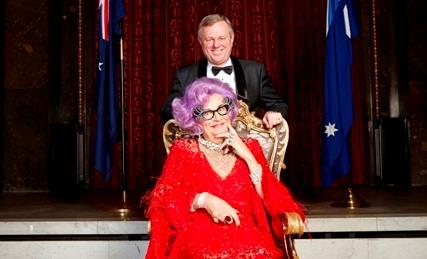 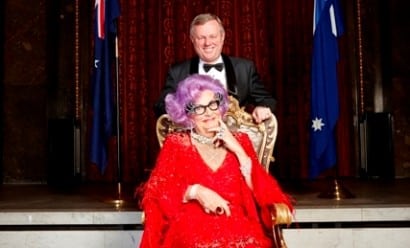 AUSTRALIAN Dame Edna Everage has added culinary critic to her long list of talents, after guest judging a special episode of Masterchef for Comic Relief.

Comedians Jack Whitehall and Mickey Flanagan, and show regulars Michel Roux Jr and John Torode, competed for the Dame’s coveted tick of approval in the kitchens of Australia House.

Mr Whitehall took his chances with a chicken and bacon risotto.

“I’m a perfectionist and could have done better. I have to live with that now and every day it will burden me, those tiny errors stalking me to my grave…but it’s just a bit of fun right?” said Mr Whitehall.

Dame Edna seemed to prefer the dish to Mr Flanagan’s offering of a steamed John Dory with red wine sauce, made with Australian wine.

“I don’t think it justified the death of a fish,” she said after tasting it.

Fellow judge Gregg Wallace paid tribute to their celebrity guest, saying: “It was marvellous to sit down for lunch in the Grand Hall of the Australian High Commission with one of the funniest women I’ve met – it’s got to be right up there with some of the best things I’ve ever done.

“I’ve watched Dame Edna for years and years and from the first glass of water to the last spoonful of desert, I couldn’t stop giggling.

“I had no idea she was such a great foodie with incredible knowledge which really impressed me, she seems to dine very well on both sides of the world.”

The segment aired on BBC on Friday as part of Red Nose Day to raise money for the Comic Relief charity. Comic Relief recorded its highest ever viewing with 12.5million tuning in, resulting in over £75 million of donations.

“The High Commission was delighted to support such a good cause and it was great that the BBC chose Australia House as the venue,” said Mr Rann.

Mr Whitehall was announced the winner, and gave thanks to his mother for “providing all of his recipes”.