Camilla and Charles experience the magic of the Melbourne Cup 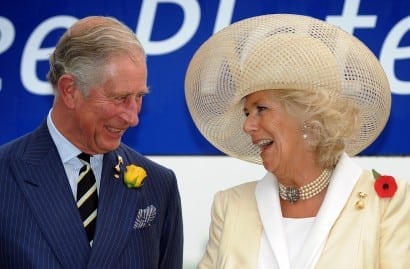 The triple Melbourne Cup-winning jockey knows all too well the magic of Flemington on the first Tuesday in November.

But on her first trip to Australia, Camilla, Duchess of Cornwall, was in for an education.

Her husband came in handy. From their seats on the VRC committee room balcony with prime viewing over Flemington, Prince Charles called on the experience he gained at the 1985 Melbourne Cup in pointing out the intricacies of the race to the duchess.

She declined his offer to use his binoculars as she watched her tip Mount Athos come home in fifth place behind surprise winner Green Moon.

Her pre-race chat with Mount Athos’s jockey Ryan Moore who, like her, had recently made the long flight south from Britain, didn’t stretch beyond small talk about jet lag and her best wishes.

But a Melbourne Cup veteran gave her more of an insight into the day.

After a low-key arrival into the mounting yard, the royal couple was introduced to several Cup jockeys in the weighing room, where Camilla spoke at length with Boss, who steered Makybe Diva to her hat trick of Cup triumphs from 2003 to 2005.

Obviously impressed with Flemington in the 20 minutes she had been there, Camilla said it was a treat to be present.

She was so enamoured with her brief experience of Flemington, that in presenting Green Moon’s co-owner Nick Williams with the $175,000 Cup, Camilla revealed to him that she’d told Prince Charles “we’ll have to come back”.

Considering Williams’ father Lloyd won the Cup with What a Nuisance last time Charles was at Flemington, he was quick to concur.

Wearing a white dress with a matching cream detailed jacket and cream hat, the duchess and the prince alighted from their car to mingle with punters after their parade down Flemington’s main straight was welcomed with subdued applause.

A man in racing silks called for “three cheers for the prince”. Although he didn’t get the chorus he was after, racegoers around the mounting yard were still enthusiastic enough to reach out for a touch of royal flesh.

Prince Charles, in a mid-blue pinstriped suit adorned with the traditional Melbourne Cup flower, the yellow rose, complimented one woman in the crowd.

“You look very fetching,” he told her.

He shook the hand of Andrew Bonwick, co-owner of Thunder Rain, which came second in the race before the Cup, and was obviously looking for some advice.

“Are you the racing expert?” he had asked Bonwick.

“Yes, Thunder Rain in the next,” he offered to the prince.

But the prince had no time to get on, as he and Camilla were whisked up to the committee room to take their spot on the balcony and mime their way through the national anthem.

It was a sporty day for the prince, who went from one Melbourne landmark to another after bowling a few balls to young cricketers at a clinic at the MCG.

“I knew someone would say that – okay, give it to me,” the prince said after someone urged him to have a bowl.

After sending down some slow, short deliveries, he reminded the youngsters: “I broke my arm in two places, so I can’t do it as well as I used to.”

The prince had earlier visited the Australian Tapestry Workshop in South Melbourne, where he was met with cheers from a small band of fans including a church group holding bouquets and shouting “we love you”.

The royal couple continue their six-day Australian tour with events in Melbourne on Wednesday morning before flying to Adelaide. – AAP