A British man caught attempting to smuggle 19 kilograms of cocaine into Australia on a P&O cruise ship has claimed that he was coerced into drug trafficking in order to pay off a £35 000 debt to a UK loan shark. 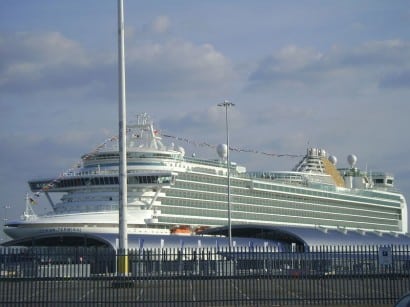 A BRITISH man caught attempting to smuggle 19 kilograms of cocaine into Australia has claimed that he was coerced into drug trafficking in order to pay off a £35 000 debt to a UK loan shark.

Ronald Fletcher, 60, faced Downing Centre District Court today charged with attempting to smuggle cocaine into Australia when his cruise ship docked in Sydney last February. He was discovered after sniffer dogs alerted police to the presence of cocaine, which Mr Fletcher had hidden inside a wetsuit that he was wearing underneath his clothing.

Mr Fletcher told the court that he had borrowed money from a loan shark named “George” in mid-2010 in order to finance a home renovation project, however things turned sour when George began threatening both Mr Fletcher and his daughter. The accused drug smuggler claims that he was told to meet a contact of the loan shark on P&O cruise ship Aurora as a way of satisfying his debt.

Mr Fletcher said: “I was in trouble with these people for a lot of money. I was just told I’d go on this ship for this cruise and somebody would meet me telling me what to do.”

The British man alleged that he was approached by a couple named “Pete and Sheila” as the ship departed Auckland, claiming that they provided him with the cocaine and instructions regarding how to transport it. Mr Fletcher said that he had assumed that he would be carrying a “hashish drug” and only realised that he would be smuggling cocaine after the cruise ship had left port.

The drugs were discovered as Mr Fletcher attempted to disembark the Aurora at Circular Quay in Sydney.  He said that he initially told officers that the sniffer dog may have picked him up because he had been “playing with myself” the night before, however he later admitted to officers that he had cocaine under his clothing.

Mr Fletcher said: “I’m dreadfully sorry and remorseful that I ever got involved in anything as ridiculous as this. In hindsight, I wish I’d just taken a beating.”

Prosecutor Kay Marinos suggested that Mr Fletcher had fabricated his claim that he was indebted to a loan shark in order to receive a reduced sentence. Mr Fletcher denied these claims, claiming that he was unaware that his assertion that he was acting under duress would result in a more lenient sentence.

Mr Fletcher, who has been in custody since his arrest last year, confirmed to the court that he owned a house in the UK worth over £200 000 and had gone on holiday in the United States of America after taking out the loan rather than paying back the money that he owed. He said that he had a “reasonable” time on the cruise and had visited the infamous island prison Alcatraz when the ship had docked in San Francisco.

Mr Fletcher will be sentenced for the attempted importation of cocaine by Judge Leonie Flannery at a later date.