Black Caviar has joined the ranks of the likes of Phar Lap and Makybe Diva after being inducted into the Australian Racing Hall of Fame. The honour comes after winning her 23rd consecutive race on the weekend. 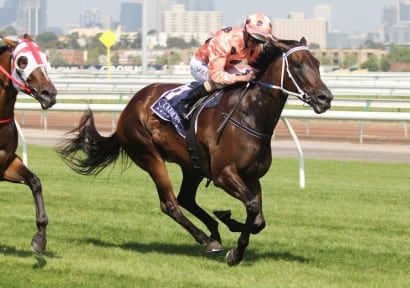 BLACK Caviar has achieved yet another milestone, having been inducted into the Racing Hall of Fame.

It is only the second time the honour has been given to a horse before retirement, the previous inductee being dual Cox Plate winner Sunline.

Black Caviar returned to the track last Saturday to take out her 23rd consecutive race.

It was her first race since competing in the UK at Royal Ascot, where she won after having travelled from Australia and overcoming exhaustion from the 10,000 mile journey.

Black Caviar joins a lustrous list of horses including Phar Lap, Carbine, Tulloch, Kingston Town, Manikato and Makybe Diva, who have also been inducted into the hall of fame.

Her managing owner Neil Werrett made special recognition of the work of trainer Peter Moody and jockey Luke Nolen.

“None of this could have happened without the horse, jockey and trainer,” Mr Werrett said.

“We are very lucky to have somebody in charge of her like Peter.

“It is an honour being with horses such as Tulloch and Kingtson Town.”

Black Caviar had previously been named Australian Racehorse of the Year for 2011 and 2012, she was also officially ranked the world best sprinter of 2012.

Bart Cummings was also inducted into the Racing Hall of Fame for his work as a trainer at the gala dinner held in Melbourne.