Barry Humphries is Australian of the Year in UK

Barry Humphries displayed all of the modesty of Dame Edna Everage or Sir Les Patterson after receiving the Australian of the Year award in the UK. 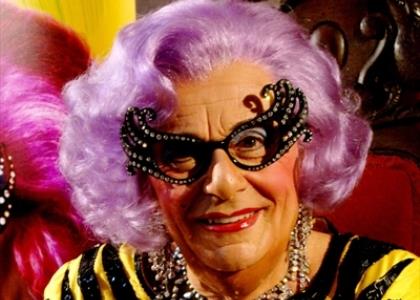 BARRY HUMPHRIES displayed all of the modesty of Dame Edna Everage or Sir Les Patterson after receiving the Australian of the Year award in the UK.

“It is about time, really,” he said with the medal around his neck.

“It really is a paper weight, it is a strain on the neck really.”

“This is the most humble day of my life,” he said.

After mocking Ms Gillard’s voice and Mr Rudd’s first name, Humphries revealed he had an inkling he was up for the award.

“I had a friend very high up in the world of media who has been tapping the phones in Australia House for many years,” he said.

“He told me, I can’t tell you his name, he is married to a Chinese girl.

“He said it was between me and Julian Assange and it turned out to be me.”

Rudd, who is in town for talks with his British counterparts, earlier showed his lighter side in a speech at the Australia Day Foundation dinner before Humphries stole the show.

Humphries, who was made an AO in 1982 and CBE in 2007, has been entertaining crowds in Britain for more than half a century with his cast of colourful characters.

Fashionista Yasmin Sewell was named young Australian achiever of the year in the UK for having established herself as one of the world’s premier trend forecasters.

Renowned British wine writer Matthew Jukes won the 2012 Honorary Australian of the Year in the UK award for his work promoting Australian wine and charity work.

The Australian of the year awards in the UK started in 2004.

Also see: Tim Minchin – Australian of the Year in the UK 2011