Six police officers and 17 others were injured on the weekend as anti-West protests got horribly out of hand in Sydney, where among others, children were seen carrying signs reading "Behead all those who insult the Prophet". 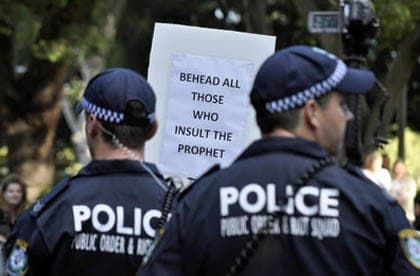 AUSTRALIAN authorities are wary of fresh violence after Saturday’s brutal anti-West demonstration in Sydney, as police urgently hunt the masterminds behind the riot.

Muslim leaders convened emergency meetings in Sydney and Melbourne on Monday night to quell any repeat of the clashes, which were part of global protests over the US anti-Islam YouTube film, Innocence of Muslims.

The Lebanese Muslim Association and the Islamic Council of NSW were both due to meet in Lakemba in Sydney’s west to urge calm.

The Islamic Council of Victoria was also arranging a meeting of imams in Melbourne.

“Our fear is that extremist elements in Australia and other countries are using this YouTube video to incite hatred and incite violence in pursuit of long-held goals,” Deputy Opposition Leader Julie Bishop told federal parliament.

Foreign Minister Bob Carr said the violence was the work of a “repugnant, lunatic fringe” while Opposition Leader Tony Abbott said “we don’t need the preachers of hate in this country”.

“I think that’s the message that has got to go from every Australian to those people on the streets of Sydney,” he told reporters.

“I don’t believe we saw an acceptable face of Islam yesterday.”

Authorities are bracing for more clashes, although NSW Police Commissioner Andrew Scipione says he hopes the voice of reason will prevail.

“If anyone is stupid enough to try this sort of thing again, I can tell you now, we’re more than ready,” Mr Scipione told Macquarie Radio on Monday.

Melbourne police beefed up their presence at several locations across the city on Monday, including at the US consulate.

The US consulate in Sydney was a target during Saturday’s violence, and US ambassador to Australia Jeffrey Bleich thanked police for defending the building.

“I’m not in fear of my safety because I have great confidence in law-enforcement personnel that we have here,” Bleich told reporters.

“I’ve got family members who want me to be expelled from Australia, but so far they haven’t been very successful.

“I intend to stay and, as I’ve told people many times, I love serving this place and they’re going to have to pry me out.”

The immediate priority for NSW detectives on Monday was to trace the as-yet-unidentified figures who used text messages and social networking sites to organise the protests, which quickly escalated into a riot.

Messages urged recipients to “defend the honour of the Prophet” and led dozens of people, mostly Muslim men, to gather in central Sydney and voice anger at the Innocence of Muslims movie.

They clashed with police who aimed capsicum spray at protesters, some of whom held signs reading “Behead all those who insult the Prophet”.

NSW Premier Barry O’Farrell on Monday ordered Family and Community Services Minister Pru Goward to investigate the background of a young child who was pictured holding one of the posters.

Mr Scipione called it an ‘outrage’.

“To see a young child with a placard thrust in his hand calling for the beheading of a person is simply something I cannot comprehend,”  NSW Police Commissioner said.

“It’s just not what we teach our children.

Seventeen people were injured and six were arrested and charged on Saturday, including champion boxer Ahmed Elomar.

Muslim leaders say they remain mystified about the identity of the protest organisers.

Sydney Lebanese community spokesman Keysar Trad said he received a text message on Friday urging recipients to “defend the honour of the Prophet” in Sydney’s CBD.

But he did not know who sent the message and he condemned the resulting violence.

“This was the dumbest thing that young people could do – all they’ve done is publicised a film that doesn’t deserve to be publicised,” Mr Trad told AAP.

The president of the Lebanese Muslim Association, Samier Dandan, told the ABC he also did not know the source of the messages, despite many inquiries. – AAP

What are your reactions to both these displays of violence in Sydney and the global furore stirred by the YouTube video?