Foreign Minister Bob Carr has said Australia’s United Nations priorities for early 2013 would include talks on the future of international involvement in Syria, and Security Council consideration of responses to the North Korean rocket launch on 12 December. 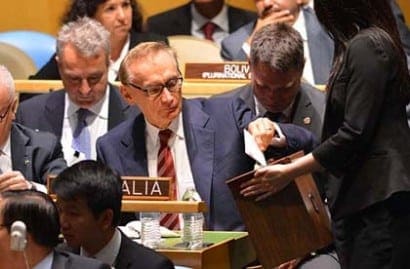 FOREIGN Minister Bob Carr has said Australia’s United Nations priorities for early 2013 would include talks on the future of international involvement in Syria, and Security Council consideration of responses to the North Korean rocket launch on 12 December.

Australia was elected as a non-permanent member of the Security Council on 19 October. It took up its two year term on 1 January 2013.

Senator Carr has said he would bring up a number of issues in the Council’s first substantive meeting due to be held next week, including UN responses to North Korea’s rocket launch and ongoing conflicts in Mali, the Central African Republic and the Congo.

“For the next two years Australia will have a direct hand in shaping solutions to the world’s most pressing security challenges,” Senator Carr said.

“We’ll bring to the Council our unique experience in dealing with humanitarian crises and regional conflicts, born from past involvement in conflicts including Timor Leste, Bougainville and Afghanistan.”

“Australians would expect that we take a leading role in talks on international reaction to this launch.”

Senator Carr also plans to urge the Security Council to address the ongoing crisis in Syria. The conflict has so far claimed 40,000 lives and left more than one million homeless.

“Australia has proposed a plan to protect medical workers in Syria and boost access to hospital care. I have flagged with UN Secretary General Ban Ki Moon our intention to pursue this plan in appropriate international forums in 2013,” said Senator Carr.

“Our plan already has support from Secretary Clinton and from European and Arabic Foreign Ministers.

“We’ll continue to push for action in the international community, to protect the lives of Syrian civilians through our medical plan, and to encourage a unified international response to this conflict.”

The Security Council oversees 15 peacekeeping operations with 117,000 personnel deployed worldwide and 13 political and peace-building missions across four continents. After the US, the UN has the largest number of troops deployed overseas. Deployments are authorised by the Security Council.

The Council also manages 13 sanctions regimes and eight subsidiary bodies covering issues such as weapons of mass destruction, terrorism, women and children and armed conflict, and women, peace and security.