Gina Rinehart grows $1 million richer every half hour. Family financial squabbles have done nothing to stop her relentless rise as the wealthiest woman in Australia, and now the world. 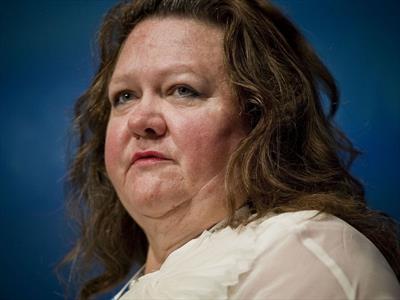 Family financial squabbles have done nothing to stop her relentless rise as the wealthiest woman in Australia, and now the world.

Her $29 billion mining fortune is $3 billion greater than that of Christy Walton, the widow whose inherited wealth springs from the US retail giant Wal-Mart.

Rinehart has ridden Australia’s resources boom like no one else, her wealth ballooning by an unparalleled $18.87 billion in the past year, according to BRW magazine’s annual rich list.

The gargantuan increase flows from foreign investment in new projects, increased production and a recovery in the iron ore price over the past six months, BRW says.

And much more could be on the way.

“A $100 billion fortune is not out of the question for Rinehart if the resources boom continues unabated,” said Heathcote.

Three of Rinehart’s four children – John Hancock, Bianca Rinehart and Hope Welker – launched a lawsuit against their mother last September in a bid to oust her as trustee of the multibillion-dollar family trust established by her late father Lang Hancock.

When Rinehart made her debut on the rich list after her father’s death in 1992, her net wealth was estimated at $75 million.

Westfield boss Frank Lowy rises to third with $6.47 billion, ahead of miners Andrew Forrest on $5.89 billion and Clive Palmer, whose failed Resourcehouse float helped push him back from fifth to eighth with $3.85 billion.

The wealthiest newcomer this year is Graham Tuckwell, founder of London and Jersey-based ETF Securities.

BRW says the Melbourne-based Smorgons remain Australia’s richest family, with an estimated worth of $2.63 billion, down from $2.69 billion last year.

They include debutant Therese Rein, wife of former prime minister Kevin Rudd, whose employment services company has made her a $210 million fortune. – AAP

What would you do if you had Rinehart’s money? Tell us below: