by Amy Fallon
in News 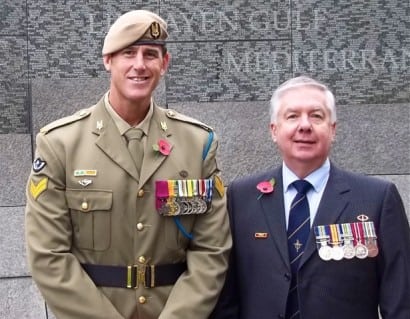 AUSTRALIANS in London marked Remembrance Day by laying wooden crosses representing late servicemen and women at Westminster Abbey and marching in the traditional Sunday parade. This Remembrance Day was a poignant one for Aussies, with another soldier wounded in Afghanistan late last week.
The Gallipoli Association, formed in 1916 to commemorate the Dardanelles-Gallipoli campaign, placed wooden crosses with poppies on them in the Field of Remembrance display at the Abbey, along with other associations. Each cross in the field, which is organised by the Royal British Legion and has been on display at the cathedral every November since 1928, had on it the name of a fallen serviceman or woman. Some also carried a special message and photo. The Gallipoli Association’s patron, the Duke of Edinburgh, walked through the grounds to pay his respects to each association’s field of crosses.
According to the Australian War Memorial, 8709 Australians died at Gallipoli. A total 40,000 British Empire and French troops and 85,000 Turks were killed. Many of the crosses in the field paid tribute to men and women who have died in more modern conflicts such as Afghanistan. Sixteen members from The Gallipoli Association also marched past the Cenotaph with thousands of other ex- servicemen and women, and war widows, in the traditional Remembrance Day Sunday parade.
Many members are involved in London Legacy, which cares for Australian War Widows in 37 countries from its UK base. President Lindsay Birrell has recently returned from the Legacy conference in Port Macquarie where the whole of the “Legacy family” dedicated themselves to caring for the deceased families of veterans. He is currently looking for more volunteers to help the charity.
Last week a soldier was injured in the Deh Rafshan district, 12 kilometres east of the Australian base at Tarin Kot, in Afghanistan’s Uruzgan province, after Afghan and Australian troops came under fire from insurgents. His condition was satisfactory, an Australian Defence Force (ADF) statement said. This follows the deaths of Captain Bryce Duffy and Corporal Ashley Birt and Lance Corporal Luke Gavin in Afghanistan last month. They were killed by an Afghan soldier training with the Australian Mentoring Taskforce.
For more information on London Legacy or the Gallipoli Association
Tags: AfghanistanAustraliaAustralians in LondonGallipoliGreat BritainRemembrance DayUK Australian NewsUnited KingdomWestminster Abbey