Australians of the Year celebrated in London

Hundreds gathered at Australia House to honour 2012’s Australians of the Year in the UK. 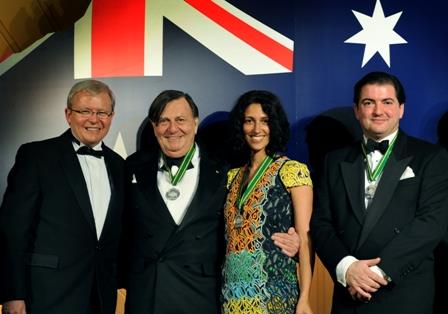 AUSTRALIA DAY was celebrated in London early this year as the Australia Day Foundation held their annual gala event to celebrate some of the exceptional Australians living and working in the United Kingdom. Over 300 guests gathered at Australia House on Saturday for an evening themed the ‘Celebration of Australia’s Olympic Heritage & Heroes’, with dignitaries including Australian Foreign Minister Kevin Rudd and Australian High Commissioner John Dauth.

“Australia Day is a day when Australians across the country and overseas celebrate what is truly great about Australia and being Australian,” the Australia Day Foundation told Australian Times in an official statement. “It is a day when we reflect on what we have achieved and what we can be proud including our values of freedom and democracy.

“It is a day to celebrate our cultural diversity and to acknowledge the contribution of both Indigenous Australians and those who have come from more than 150 countries to make Australia their home.

“In the UK, it is also a day to recognise the benefits we have gained from our British heritage and appreciate the close links that are retained between our nations.”

The prestigious Australian of the Year in the UK Award was this year awarded to celebrated Australian comedian and actor, Barry Humphries. Awarded annually since 2004, it salutes an Australian who has excelled in their own right in Britain.

“Barry Humphries is quite simply one of the funniest and most revered artists Australia has produced and he is loved by millions of people throughout the world,” Australia Day Foundation chairman Philip Aiken told the gathered guests.

And as usual, Humphries stole the show and was at his hysterical best in accepting the award.

“It is about time, really!” he declared with that famous wry smile.

He used the occasion to poke fun at media magnate Rupert Murdoch and he opened his acceptance speech by quoting Mr Murdoch’s comments in front of a British parliamentary committee on phone hacking last year.

“This is the most humble day of my life,” he said, before revealing he had an inkling he was up for the award.

“I had a friend very high up in the world of media who has been tapping the phones in Australia House for many years. He told me.

“I can’t tell you his name, he is married to a Chinese girl.

“He said it was between me and Julian Assange and it turned out to be me.”

Humphries also joked that his alter ego Dame Edna would be very jealous of the award.

But Humphries wasn’t the only one drawing the laughs. In presenting the award to the man behind Australia’s favourite ‘Dame’, former Australian Prime Minister Kevin Rudd had a few gags of his own.

“What Barry said [to me] was he didn’t think Australia was ready for a prime minister called Kevin. Well, can I just say history has declared its verdict and Barry was right!”

Humphries joins a distinguished list of previous Australian of the Year in the UK recipients such as Clive James, Sir Charles Mackerras, John Williams and Stuart Devlin.

One of the world’s foremost retail consultants and fashion trend forecaster, Yasmin Sewell, was also honoured at the gala night picking up the Young Australian Achiever of the Year in the UK award.

“I got married two weeks ago and had a baby a few months ago so it’s been an amazing couple of months actually,” a delighted Sewell said at the event.

Originally from Coogee, NSW, Sewell now calls London home and has carved out a very successful career in the fashion world.  In 1999, at just 21-years-old, Sewell set up her own boutique Yasmin Cho in London’s Soho and it was listed by the New York Times as one of the top five boutiques in the world, described as an Aladdin’s cave of almost 50 undiscovered designers.

Known for her knack of predicting the “next big thing”, Sewell has launched the careers of many of the most influential designers of today such as Rick Owens, Pierre Hardy, Christopher Kane and Acne.

She set up her own consultancy in 2008, and now works with her team on projects including retail strategies, trend direction for fashion brands and creative direction for young designers. Some of her projects have included London’s Liberty Department store, Westfield (both in Australia and the UK) and working for the British Fashion Council and she is a regular judge of the British Fashion Awards.

Sewell is committed to supporting young talent in the fashion industry. Her eye for new designers is well known, and this reputation has been acknowledged through Sewell’s work with the British Fashion Council where she consults on its mentoring programs with young designers. She frequently travels back to Australia where she consults to a variety of clients, from brands, to high street retailers and designers. Sewell is very passionate about continuing to work in Australia because she considers it an important global market place.

One of the UK’s most influential and popular wine writers, Matthew Jukes, has become this year’s recipient of the Honorary Australian of the Year in the UK award. Honoured at the Australia Day Foundation gala evening, Jukes was celebrated for his work promoting Australian wine and charity work.

“Matthew Jukes has undoubtedly made a huge contribution to the Australian wine industry and as Patron and Founder of ‘Touch Wine Australia’ Matthew Jukes is a truly worthy recipient of the 2012 Honorary Australian of the Year in the UK award,” chairman of the Australia Day Foundation Philip Aiken said.

In a wine trade survey, UK retailers were asked which wine writer has the most influence over their customers. The answer was, unanimously, Matthew Jukes. In another list compiled by OLN (Off Licence News) last year, Jukes was voted the most influential wine writer in the UK.

With over nine million Daily Mail readers a week, Jukes has the most keenly followed wine column in the UK and he also writes for MoneyWeek weekly and is a regular contributor to both The Week and Decanter Magazine.

Jukes has previously won the highly prestigious International Wine and Spirit Competition’s Trophy for Wine Communicator of the Year and all six editions of The Wine List, his annual wine guide, were UK bestsellers. He created and co-authored Taste Food & Wine, an annual wine guide published in Australia and New Zealand, with Brisbane-based wine writer Tyson Stelzer.  Taste was a number one bestseller in its inaugural year of publication and it has won the Australian Food Media Award for Best Food and Writing.

Jukes lectures and judges all over the world, most recently in Canberra for the National Wine Show of Australia.  Last January he was asked to sit on the inaugural panel of the London version of the Stonier International Pinot Noir Tasting after having done so twice in Melbourne.  He then went on to moderate the Melbourne event last November.

He is the creator of a handful of ground-breaking, annual, wine releases including the 100 Best Australian Wines and he launched the ’Hall of Fame’ of the 100 Best Australian Wines in May 2010 in London.  He tours the UK each year with his ‘100 Best’ road show spreading the word about these great wines.  Five years ago Matthew created The Great Australian Red competition – the annual quest to find the finest Cabernet Sauvignon/Shiraz in Australia, which he says is the ‘the blend that defines Australia’.

Matthew is also the Patron and Founder of Touch Wine — which started in 2005 to raise money for the Hutt St Centre for Homeless in Adelaide.  Wine Rules used the Touch Wine template for the first time in Melbourne, in 2010, and this event raises funds for St Mary’s House of Welcome. These annual events are incredible celebrations of fine wine, delicious food, loud music and deft ‘touch footy’ skills!  To date his various initiatives have raised over $750,000AUD for charity and Jukes maintains that his greatest personal satisfaction is derived from the growth and success of Touch Wine.

While the awards ceremony was definitely the highlight of the evening, Australian chef Brett Graham of two Michelin star restaurant ‘The Ledbury’ created a menu “worthy of a gold medal” for the attending guests who also enjoyed some of Australia’s finest wines as they watched a cabaret performance by Australia’s talented Caroline O’Connor. — Tim Martin with sources