US ambassador Jeffrey Bleich says he hopes America will remember the victims of September 11 the same way Australians have embraced the spirit of the ANZACs. 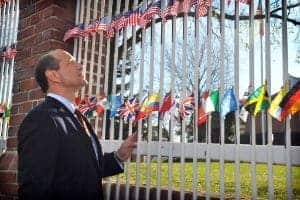 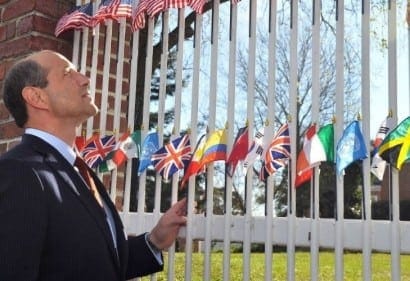 US ambassador Jeffrey Bleich says he hopes America will remember the victims of September 11 the same way Australians have embraced the spirit of the ANZACs.

Mr Bleich was joined by Foreign Minister Bob Carr and more than a hundred guests at a private ceremony at the US Embassy in Canberra on Tuesday to mark the 11th anniversary of the New York and Washington terror attacks.

After lighting candles spelling out the word `peace’ on the embassy’s lawn, Mr Bleich said the anniversary was filled both with great sadness and pride.

“As we become further and further from the event, we focus on our resilience and on the strength that people have demonstrated in the now 11 years since,” he said.

“Today we work to help restore the charity and the love that these terrorists sought to take away.”

The ambassador said America’s future generations should find inspiration when they remember those killed in 2001 from the way Australia remembers its fallen soldiers on ANZAC Day.

“Virtually no-one who attends the ANZAC parades was there at the time of the original ANZACs and yet it is part of our history, part of the culture here in Australia,” Mr Bleich said.

“I think it is a source of history, understanding, pride and national bonding and so I hope that the US will have that same experience in remembering the victims of 9/11.”

Senator Carr said the events of 9/11 had reached deep and far, especially after the bodies of five diggers killed in Afghanistan were returned home last week.

“They died in a war which began in the horror and terror in New York, Washington and Pennsylvania 11 years ago,” Senator Carr said.

“Three times as many Australian soldiers – 38 – have now died in Afghanistan as the Australians who were killed in New York on that terrible day.”

Exactly 2997 American flags were posted on the front fence of the embassy to remember each of the victims killed in the attacks. – AAP