Indonesian authorities say an Australian has been accused of involvement with organisers of the overloaded asylum seeker boat that sank this month killing as many as 200 people. 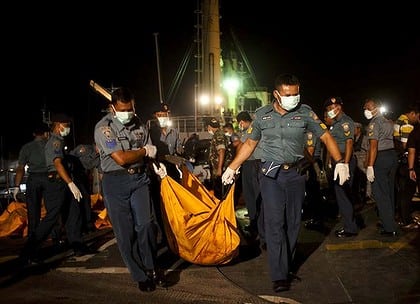 INDONESIAN authorities say an Australian has been accused of involvement with organisers of the overloaded asylum seeker boat that sank this month killing as many as 200 people.

Indonesian police spokesman Saud Usman Nasution has told Fairfax newspapers that investigators have given the name of the man to Australian Federal Police after several survivors identified him.

“We have passed on the name of the Australian man – Mr X – to the AFP to follow up,” Inspector-General Nasution said.

But an AFP spokeswoman told Fairfax that “the AFP has not received a referral from the Indonesian national police”.

“The AFP has made no arrests in relation to this matter and this is a matter for the Indonesian authorities,” she said.

Told of the AFP comments, General Nasution insisted the name had been passed on and the investigation was a joint effort by both countries’ law enforcement agencies.

Four Indonesian soldiers have been detained for their involvement with two local owners of small boats used to ferry the asylum seekers to their “mother ship” at sea, but there have been reports indicating more security personnel and officials were involved.

General Nasution said multiple suspects had been identified in Indonesia and in “countries of origin”, understood to be Pakistan and Iran.