Prime Minister Julia Gillard is confident key independent MPs will honour their agreement to allow the parliament to run its full term, despite concerns about her government accepting the vote of MP Craig Thomson. 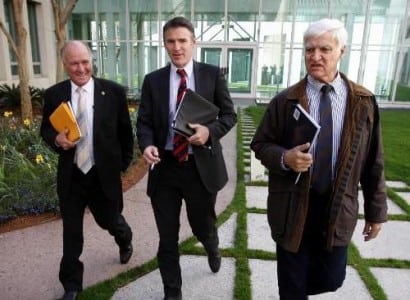 PRIME MINISTER Julia Gillard is confident key independent MPs will honour their agreement to allow the parliament to run its full term, despite concerns about her government accepting the vote of MP Craig Thomson.

Ms Gillard’s comments came as Health Services Union (HSU) acting president Chris Brown flagged his union could in future try to seize back money allegedly misused by Mr Thomson when he was secretary from 2002 until his election as a Labor MP in late 2007.

Independent MP Rob Oakeshott has expressed concern that when he entered into the “good faith agreement” with Ms Gillard to support Labor to form a minority government after the 2010 election he was not aware of the allegations against Mr Thomson.

Mr Oakeshott says he will listen carefully to what Mr Thomson has to say in a statement to parliament on May 21 before deciding whether to back some form of censure.

However, Ms Gillard said on Friday she was “very confident” her government would last through to the election due in late 2013.

“The election is due in the second half of 2013 and it’ll be held on the normal time,” she said in Adelaide.

Another independent with an agreement with the government, Tony Windsor, said in an open letter to media across the country that he would not be supporting any action by the parliament against Mr Thomson.

“Every Australian has rights that include a presumption of innocence until proven guilty,” Mr Windsor said.

He was backed by another independent, Bob Katter, who said he did not want to be cast in the role of judging other MPs.

Laws passed in the 1980s rule out federal MPs being expelled from parliament by other members, but do not preclude censure or temporary suspension.

Opposition Leader Tony Abbott said it was a credit to Mr Oakeshott that he was taking the FWA report seriously.

He said the independent MP was right to question Mr Thomson’s legitimacy as a member of parliament.

Meanwhile, HSU general secretary Kathy Jackson wants the union’s national executive to back a motion, at a national executive meeting on Monday, to sue Mr Thomson, who now sits as a federal independent MP after being suspended from the ALP.

Ms Jackson is seeking legal advice on whether Mr Thomson can be forced to pay the money back with interest.

Mr Brown said the union should wait until a civil action being brought by FWA is finalised.

“If the opportunity arises and we can do that I believe we should do that, but we are not going to be able to do that until a lot of the legal things are over,” Mr Brown told AAP on Friday.

It is understood two legal problems impeding the recovery of money being include the statute of limitations and a defamation settlement between the union and Mr Thomson.

Mr Thomson told AAP he planned to make a 30-minute statement on 21 May.

“This really is the first opportunity I’ve had to respond to the Fair Work report,” he said.

“It will be a broad, extensive response and will take around half an hour – it’s not going to be a two-minute statement.” – AAP