Sir Richard Branson has been honoured by the Australian federal government for his advocacy to protect the world’s oceans. 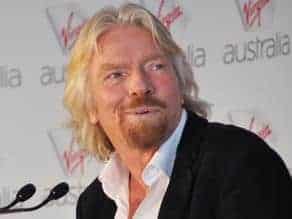 BRITISH entrepreneur Sir Richard Branson has been presented with a federal government award for being a protector of the world’s oceans.

They were at the launch of a video celebrating the creation of the largest network of marine parks in the world and featuring Sir Richard.

In 2012 the boundaries of Australia’s marine parks were extended to cover more than 2.3 million square kilometres of ocean.

“We wanted to establish the largest network of national parks in the ocean that you will find anywhere in the world,” Mr Burke told reporters.

“That’s now in the final days of becoming a permanent part of the conservation landscape of the planet.”

Sir Richard is a member of the group OceanElders and is a strong advocate of environmental issues, including the protection of oceans.

“It’s wonderful to see laws enacted in Australia that will protect the creatures most at peril so that future generations of not just Australians can swim and enjoy these beautiful species,” he said.

He said that sharks were his favourite species of Australian marine animal – and that “99 per cent” of them were harmless.

“I do have an affinity with sharks which sounds bizarre, I’ve swum with all sorts of sharks … all species within the sea are exquisite.”

Sir Richard is not the only famous face who has donated their time and energy to the video.