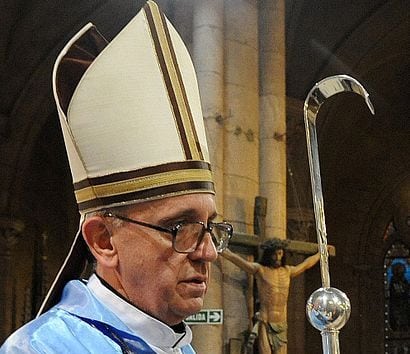 THE Australian government has congratulated Cardinal Jorge Mario Bergoglio on his election as Pope of the Roman Catholic Church.

Prime Minister Julia Gillard said the election of a Pope from the “new world” is an occasion of genuinely historic proportions.

“My thoughts are with them all.”

The choice of Cardinal Jorge Mario Bergoglio to be the new Pope Francis represents the first time a pontiff comes from the Jesuit order.

Spaniard Ignatius von Loyola founded the Societa Jesu in 1534, a group dedicated to the renewal of the Catholic Church and its saints.

That is often accomplished by spiritual exercises, 30-day retreats of silence for contemplating the mysteries of the faith.

Unlike other orders, Jesuits do not have special robes.

Nor do they retreat to cloisters, but live more publicly, teaching in schools, for example.

Jesuits are often considered at the intellectual forefront of the church and are known for their sophisticated sermons.

Education, missionary work, spirituality and care for the poor are among the duties of order members.

Becoming a member is demanding: each Jesuit is expected to complete a degree in theology and philosophy.

Jesuits played a key role during the European counter-Reformation, setting up institutions in many areas that had become Protestant.

Jesuit orders were outlawed in many areas by rulers who feared they had become too powerful.

The order has also been seen as slightly out of favour within the Church because of its politically aggressive campaign against poverty. – AAP