Australia has boosted 40 years of diplomatic relations with China to a new high through an agreement for an annual “strategic dialogue.” 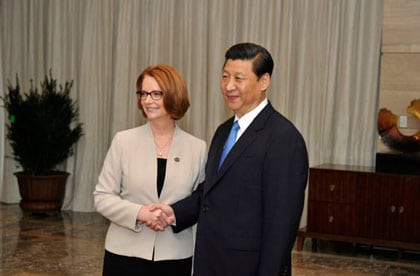 AUSTRALIA has taken advantage of China’s leadership change to seal an historic deal that lifts 40 years of diplomatic relations with the Asian giant to a new level.

“This is a great step forward,” Ms Gillard said at the start of the inaugural leaders’ meeting in the Great Hall of the People on Tuesday.

Premier Li said at the meeting the agreement would “raise the Australia-China relationship to a new height”.

The only other countries with similar agreements with China are Russia, the UK and Germany.

Ms Gillard told reporters later that the lack of a free trade agreement was a “gap” in the relationship, and talks on it would resume in May after Premier Li expressed a strong interest.

The prime minister was given an official welcome outside the Great Hall involving precision marching Chinese military and a cannon salute.

The economic talks will involve the treasurer and trade minister meeting with the chairman of China’s powerful National Development and Reform Committee.

Ms Gillard said she wanted the relationship to go beyond simply economic ties.

“Our partnership is broad, it’s deep, it’s complex and it’s a relationship we intend to keep focusing on into the future,” she told reporters.

The two countries also signed a deal to form a joint expert group on carbon trading, which will meet regularly, and an exchange of senior Defence Department and People’s Liberation Army officers to discuss regional security.

While no agreement was struck on defence ministers’ meetings, there will be a new exchange of defence department officials.

The prime minister said in the long term she would like to see joint exercises involving Australia, the United States and China.

A further agreement was signed on cooperation to tackle poverty and health issues, such as malaria and HIV/AIDS, in the Asia-Pacific region.

Ms Gillard was directly involved in the deal negotiations, writing to former president Hu Jintao in April 2012 ahead of a follow-up by senior foreign affairs officials and Foreign Minister Bob Carr.

It came together a few weeks after China’s leadership transition in March.

The prime minister began the day visiting the Chenjinglun high school in Beijing where she met year 11 students.

The school has a sister relationship with Perth’s Mount Lawley senior high.

Ms Gillard later told a business lunch that commercial and economic links between the two countries were a firm basis for broader cultural, social and political ties based on “mutual interest and mutual trust”.

“I am committed to a relationship which goes well beyond the economy,” she said.

Ms Gillard slammed federal opposition criticism about foreign investment, saying there was “clear potential for expanded Chinese investment in Australia” beyond the 380 deals worth $81 billion that have been approved during the past five years.

Over the next 10 years, as China’s economy expands, Australia would be well placed to provide services such as urban planning and construction, health and welfare, water management and sanitation, she said.

On Monday, the prime minister announced direct trading between the Australian dollar and Chinese renminbi, and a 2014 Australia Week in Shanghai featuring film and music stars and artists similar to the G’Day USA event.

Ms Gillard will head back to Australia on Wednesday morning. – AAP