Australia on high bushfire alert ahead of wicked weekend heatwave

Much of Australia will be on high bushfire alert this weekend as a prolonged heatwave pushes across the country, with record temperatures already experienced in some centres. 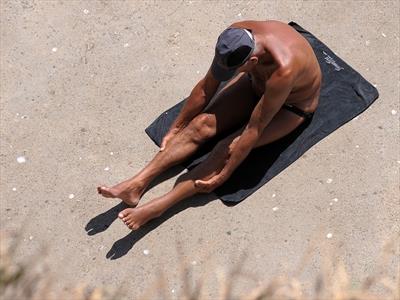 MUCH of Australia will be on high bushfire alert this weekend as a prolonged heatwave pushes across the country, with record temperatures already experienced in some centres.

A number of bushfires are being fought in South Australia, Victoria and Tasmania. Authorities in those states are urging people to prepare themselves and their properties in case of fire.

Firefighters in Tasmania fear some houses have been lost at the township of Dunnalley near Hobart.

Health bodies are urging people to drink plenty of water and stay out of the heat.

The Bureau of Meteorology’s acting regional director in South Australia, John Nairn, says while heatwaves are a normal part of the Australian summer, the current blast is unusual for the large area it is covering.

“More than 70 per cent of the continent is currently experiencing heatwave conditions,” he said.

“Severe heatwave conditions across the interior of Australia are set to continue for a while yet.”

Among the hottest parts of the country on Friday were Wudinna, on South Australia’s Eyre Peninsula, which hit 48.2C. Adelaide reached 45C and Hobart reached a record 41.8C – one degree hotter than the record set in 1976.

Tasmania Fire Service chief officer Mike Brown said conditions at times on Friday reached the catastrophic level developed after the Black Saturday fires in Victoria, with up to 40 fires burning around the state.

“I don’t think we’re quite out of the woods yet.”

But it is the Dunnalley and Forcett fires, which the 100 fire crews fighting them say they can’t contain, that are causing most concern ahead of a mild southerly change due in Hobart around midnight.

On South Australia’s Fleurieu Peninsula, three farming properties were under threat on Friday, while fires were also being fought near Currency Creek, on the Yorke Peninsula, in the Clare Valley, and at Truro, north of Adelaide.

Country Fire Service spokesman Mal Watts said while a cooler change was expected to bring temporary relief to coastal areas of the state on Saturday, fire fighters would remain on high alert.

“We are throwing everything that we are able to at incidents as they occur,” he said.

“We’ve got to get through today, then we get a bit of a lull and then we’re back into it again next week.

Temperatures across the state have tipped past 40C in many communities with extreme fire danger ratings.

A fire in a pine plantation at Mt Richmond in the state’s southwest is a “major concern”.

The Country Fire Authority (CFA) issued an emergency warning for the fire, which could affect the Lake Monbeong and Swan Lake camp grounds.

He said the fire had no major settlement in its path. However, farming communities could be threatened, and people considering leaving should head for Portland.

The bureau of meteorology says the scorching heat bearing down across many states will continue “unabated” well into next week.

The National Heart Foundation is advising those with heart disease to take it easy during the next few days, with studies showing an increase in heart attacks and death from extreme heat.

The foundation says people most at risk are those with a chronic disease, such as heart disease, and the elderly, children, people on certain medications and those engaged in strenuous outdoor activity.

Police have also warned that leaving children, elderly people or pets unattended in cars could prove fatal in hot weather.

Surf lifesavers are expecting to have to rescue hundreds of beachgoers this weekend as swimmers escape the heatwave in NSW.

Prime Minister Julia Gillard has called on people to be careful.

“Take care and stay safe as we face extreme heat around our nation. Listen to warnings on the high bushfire risk. JG,” she tweeted on Friday.