English comedian and The Daily Show with Jon Stewart regular, John Oliver, has described Australia as one of the most “comfortably racist” countries he had ever visited, claiming that prejudice against Lebanese-Australians was proof that racism in Australia was “undeniably specific”. 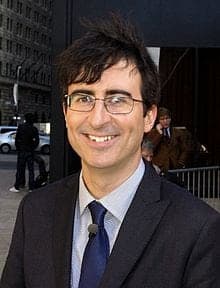 A PROMINENT English comedian has described Australia as one of the most “comfortably racist” countries he had ever visited, claiming that prejudice against Lebanese-Australians was proof that racism in Australia was “undeniably specific”.

John Oliver, a Birmingham native, spoke about his observations on Australian culture in a podcast for The Bugle. Oliver is best known for his role on satirical American news program The Daily Show with Jon Stewart, and is scheduled to be taking over from Stewart as interim host of the popular newscast over the summer period.

Oliver was filming in Australia last week, using the opportunity to gain some insight into the national culture. He described the country as “a coastal paradise surrounding a rocky hell”, asserting that it was a “sensational” place that he would love to visit again in the future.

Oliver said: “Australia turns out to be a sensational place, albeit one of the most comfortably racist places I’ve ever been in. They’ve really settled into their intolerance like an old resentful slipper.”

The comedian focused much of his critique on the cultural perceptions of Lebanese-Australians in society, claiming that the most intense contempt that he discovered in his research was reserved for this particular ethnic subculture.

Oliver said: “You can say what you like about Australian racism; it is undeniably specific. I had a couple of Australians — more than one — complain to me about all the ‘Lebos’ in the country, referring apparently to the Lebanese. Who the f*** is annoyed by Lebanese people? In a way you have to admire the attention to detail. Not just all those Arabs, but the Lebanese.”

“That’s like saying ‘You know who I can’t stand? Sri Lankans. Malaysians not a problem. Bangladeshis, lovely people, but Sri Lankans — I’ve got no time for them, Jose.’ How many Lebanese people can there actually be in Australia? There’s only just over four million of these people in f***ing Lebanon.”

Oliver, a graduate of Cambridge University, went on to criticise the argument that Australia could not support increased migration. He claimed that “the one thing Australia cannot argue is ‘There’s no room here in this country’ because that land is f***ing gigantic.”

The comedian’s comments have sparked mixed reactions in Australia, with the country divided about whether Oliver’s observations were accurate. Talkback radio host Ray Hadley suggested that Oliver should go to “some parts of the north of his own country” to truly observe racism, and questioned Oliver’s statement that he had spoken to “a couple of Australians”.

On Twitter, @fanofthefray wrote “@iamjohnoliver being pathetic and ignorant is their forte; recklessly endangering our rep as a lucky country”, while @lameeswho disagreed by saying “i’m annoyed by YOU @iamjohnoliver. I hope there are always more Lebanese people than people as useless as you.”

Oliver can be seen on The Daily Show with Jon Stewart on Comedy Central in the UK. He continues to serve as the program’s Senior British Correspondent, and will take over Stewart’s role as The Daily Show’s anchor over the summer.