On Thursday 7 February Australia House played host to the UK launch of a book detailing the history of a Tasmanian and Australian wilderness icon — Frenchmans Cap. 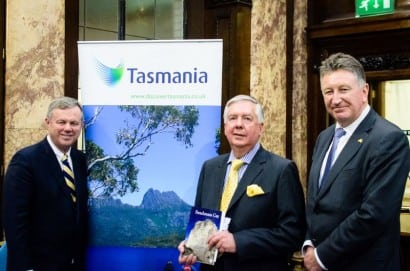 To see a photo gallery of the event view: Frenchmans Cap book launch at Australia House

FRENCHMANS Cap: Story of a Mountain by Simon Kleinig, renowned author and wilderness enthusiast, brings to life a collection of stories which define the mountain’s journey from its geological genesis through colonial times to the modern era. It is a rare insight into not only the mountain itself, but the history and development of a unique area of Tasmania, and the colourful characters that helped shaped these stories.

Queensland Agent-General Mr Ken Smith welcomed guests, and thanked the book’s Queensland publishers, Interactive Publications. He also noted his soft spot for the unique beauty and inspiring rugged landscape of Tasmania and its wilderness areas, and acknowledged the important role Frenchmans Cap had played in the development of a strong environmental consciousness in Australia.

High Commissioner to the UK, Mike Rann, offered his support for the book, saying it was an “extraordinary series of interwoven stories” and a unique way to tell the history of the Cap by intertwining a colourful procession of characters with the historical and geological details.

Author Simon Klenig, an Australian writer living in London and Honorary Secretary at London Legacy, thanked guests for attending and spoke of his wish for the book to convey the important role of the mountain in Australia’s history and his hope that it would contribute to a celebration of all the wild places in the world that need preserving.

Tourism Tasmania provided drinks and finger food, including Tamar Ridge Pinot Noir and Sauvignon Blanc. With a visual display of beautiful iconic Tasmanian scenes projected onto the wall throughout the evening, guests were temporarily transported from cold and wintery London far away to the craggy peaks of wild Tasmania.

For a detailed and engaging history of Tasmania’s wildness icon, Frenchmans Cap by Simon Kleinig is available online at Amazon and from leading bookshops.