Are we a nation of criminals? A recent report on Australian Crime Commission statistics by the Daily Mail suggests the strong Aussie dollar and high wages have resulted in a influx of drug smugglers and foreign sex workers. 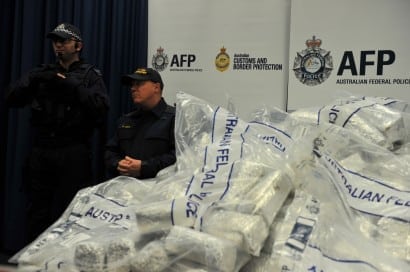 The Daily Mail have put the spotlight on the illicit underbelly of Australian society in an editorial claiming that the nation’s strong economy has resulted in a criminal culture based on drug trafficking and rampant prostitution.

In the article, journalist Sean O’Hare claimed that the increased financial reward of conducting illicit business in Australia provided significant incentive for international criminal enterprises to establish themselves Down Under. The editorial goes on to suggest that the high wages and standard of living enjoyed by Australians has contributed to an increase in the disposable income that is available to be spent on illicit ‘luxuries’ such as drugs and sex.

O’Hare said: “Australia, once an 18th century penal colony, is still attracting criminals although it would seem they are now going there out of choice.

“The Australian Crime Commission, which examines trends and works closely with police agencies, said heroin and MDMA, also known as ecstasy, sell for about eight times more in Australia than in Britain and the United States, though Australia is a much smaller market.”

Australian police claim that despite offering a notably smaller consumer base for criminal syndicates than regions such as the United States of America or the United Kingdom, the difficulty of ensuring consistent supply of product to Australia allows suppliers to set a higher price point than they would in other markets.

Data supplied by the Australian Crime Commission states that a kilogram of cocaine is worth approximately £1,540 in Colombia or £21,186 in the United States of America. The same kilogram of cocaine would cost approximately £141, 000 in the Australian drug market. On the street level — after these drugs have been cut with other substances and packaged — a gram of cocaine in Australia could fetch as much as £195, as opposed to the typical street value of around £50 for the same product in the United Kingdom.

Cocaine is typically classed as an unaffordable ‘luxury’ drug for Australian consumers, while in the United Kingdom police report that it is common practice for street dealers to offer “buy two, get one free” deals to their customers in order to compete in a crowded drug-selling environment that inevitably drives price down.

The Australian Crime Commission report that in the first six months of 2012 authorities made 69,500 arrests for the supply, trafficking or distribution of illicit substances. This figure represents the highest level of drug-related criminal activity in the past decade. The Daily Mail claims that the financial benefits of drug trafficking in Australia “show why some are willing to risk up to 20 years in prison” in order to do business in the lucrative Australian drug industry.

O’Hare’s editorial also claims that the mining boom in Australia’s rural regions has contributed to an influx of foreign sex workers coming to the country in order to capitalise on the combination of isolation and high disposable income experienced by Australian miners.

A report prepared in early 2012 by the University of New South Wales claims that the average hourly rate for a sex worker in Sydney was around £100, while women engaged in prostitution could double that rate by working in mining towns where they are able to take advantage of a cornered market that is almost exclusively male. Industry sources claim that a sex worker operating in the remote town of Kalgoorlie, Western Australia, is able to charge upwards of £195 per hour for their services.

The Australian Federal Police claim that the profitable nature of prostitution in Australia is partially responsible for the notable increase in foreigners coming to the country to engage in sex work both in licensed premises and through illicit avenues. Statistics show that in the past six years 53% of sex workers in Australia have come from Asia, with a further 13.5% coming from other non-English speaking regions to work in the Australian sex trade.

The Daily Mail’s indictment of Australia as a haven from criminality comes on the heels of several editorials and news articles targeted at Australia’s reputation that have been published in the last several months. In early November The Daily Mail published an article denouncing the ‘loutish’ behaviour of Australian spectators at the Melbourne Cup in the presence of Prince Charles. The paper has also been at the forefront of the British media’s campaign against the 2Day FM presenters involved in the royal hoax scandal in late 2012.

(Image: AFP with a seizure of drugs which included 306kg of crystal methamphetamine and 252kg of heroin, by Paul Miller)