Aussies vote for the Great Barrier Reef and Uluru

Patriotic Aussies have snorkelled and splashed their way to the opening of the world's most scenic and remote polling booth, in the heart of the Coral Sea. 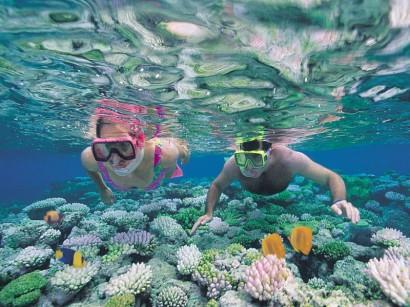 PATRIOTIC Aussies have snorkelled and splashed their way to the opening of the world’s most scenic and remote polling booth, in the heart of the Coral Sea.

The pop-up booth was erected on the tiny sandbank formation of Upolu Cay, in the Great Barrier Reef 30km off the coast of Cairns.

It was set up by Tourism Australia to promote voting for the Great Barrier Reef and Uluru in the “New 7 Wonders of Nature” campaign, a global search to recognise the world’s seven most wondrous natural sites.

Both locations have been shortlisted among the 28 finalists, but they face stiff competition from New Zealand’s Milford Sound, South Africa’s Table Mountain and the Grand Canyon in America.

The final seven wonders will be decided by a global public vote.

Earth Hour spokesman and ambassador for the Great Barrier Reef in the competition, Andy Ridley, urged Australians to get behind the two national icons.

“There’s no question about it, the Great Barrier Reef and Uluru are simply two of the most spectacular natural wonders in the world,” he said.

“We need to ensure that each continues to be recognised on a global scale.”

Tourism Australia boss Andrew McEvoy said it was great to have two of our most beloved natural attractions shortlisted.

“To gain further global recognition is an important opportunity for us, as it truly serves to reinforce our message to the rest of the world that there’s nothing like Australia,” he said.

To vote for the Great Barrier Reef go to www.n7w.com/gbr

To vote for Uluru go to www.n7w.com/uluru