Australian artists will perform alongside the likes of Elton John and Paul McCartney for a special concert celebrating the Queen's Diamond Jubilee. But the question is, will Australia's Pop Princess be invited to the royal event? 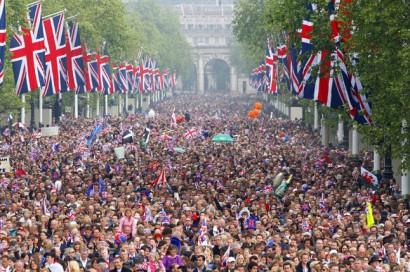 AUSTRALIAN artists will perform alongside the likes of Elton John and Paul McCartney for a special concert celebrating the Queen’s Diamond Jubilee.

While the Aussie entertainers due to join the royal gig are yet to be named, organisers of the 4 June event guarantee that the great southern land will be represented on stage in front of Buckingham Palace.

She should be so lucky

Asked if Australian pop princess Kylie Minogue has been approached to perform on the night, concert organiser and Take That band member Gary Barlow declined to commit.

“I can’t reveal that yet,” he told reporters at the Palace on Tuesday.

“There will be definitely artists from Australia.”

The concert aims to showcase musical stars spanning the six decades of Queen Elizabeth’s reign, from genres including rock and pop, classical, musical theatre, and ballet.

Stars of the show

The schedule of artists is about two-thirds complete and names of additional performers will be revealed each month in the countdown to the concert.

“We are trying to include everyone … West End, ballet … as well as the Commonwealth,” Barlow said.

Princes William and Harry have both been consulted about the artists and songs they would like to see included in the concert.

A spokeswoman for the event said: “The Queen has seen the musical line-up and is entirely content and happy”.

She and Prince Philip, along with other senior members of the royal family, will be in the concert audience.

Best seats in the house?

The Palace is running a ballot for UK residents for 10,000 seats to the 8pm (local time) concert, which organisers say will be broadcast around the globe.

The concert is one in a series of events planned to mark the monarch’s 60-year reign, and comes a day after a River Thames Diamond Jubilee Pageant which will see some 1,000 craft make their way along the London waterway. – AAP

Which Aussie artists would you have represent Australia at the Queen’s Diamond Jubilee? Comment below: