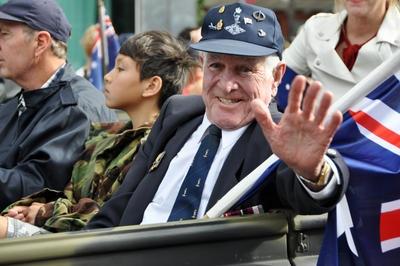 AS Prime Minister Julia Gillard honoured the original Anzacs at Gallipoli, Australians at home wept for the new Anzacs.

The rawest grief on Wednesday’s 97th Anzac Day belonged in Townsville, home to three diggers whose recent sacrifice in Afghanistan carried forward the Anzac tradition forged in Turkey in 1915.

“Young men who last year may have well stood next to you at this gathering, or played a game of two-up with you, have made the ultimate sacrifice for our nation,” Brigadier Shane Caughey told a remembrance service.

He asked the crowd to remember the most recently fallen of 32 Australians to die in Afghanistan in the past decade.

Another Queenslander killed in the attack, Corporal Ashley Birt, 22, was remembered by the people of Gympie, just as country towns all over Australia have remembered their own over the years in the roll call of more than 100,000 Australians lost in war.

In Melbourne, Afghanistan veteran Colonel Jason Blain told the dawn service it was important to remember the new Anzacs who were prepared to follow in the steps of those at Gallipoli and make the ultimate sacrifice.

“We ask in return of our fellow citizens, don’t regard our service in Afghanistan as being of no worth, the death of our friends and fellow soldiers as having been in vain. It’s simply not true,” he said.

Governor-General Quentin Bryce made a surprise visit to troops serving in Afghanistan before flying to Gallipoli to join Ms Gillard and thousands of other Australians at Anzac Cove.

Making the first prime ministerial Anzac Day visit there in seven years, Ms Gillard acknowledged the Turkish nation as a worthy foe that had proved to be an even greater friend.

“No nation could have better guarded our shrines or more generously welcomed our pilgrims,” she told the dawn service at Anzac Cove.

In a later address at Lone Pine, where seven of the nine Gallipoli VCs were won, Ms Gillard said the original Anzacs did something greater than uphold a tradition.

“They created one, a new story for a new nation,” she said.

“This was our first act of nationhood in the eyes of a watching world, an act authored not by statesmen or diplomats, but by simple soldiers.

“Victory was not gained here, but meaning was won in this place and a harsh learning.”

IMAGE: War veterans and armed service personnel take part in the Anzac Day parade in Perth, Wednesday, April 25, 2012. Australians and New Zealanders today honour their soldiers who died in Gallipoli in WWI and in other conflicts around the world. (AAP Image/Angie Raphael)