Australian pop-rock band 5 Seconds of Summer have been given the opportunity of a lifetime after being chosen by One Direction to be the support act for their upcoming 2013 110 date world tour. One Directon choose the Aussie band to be their support after seeing them perform on YouTube. 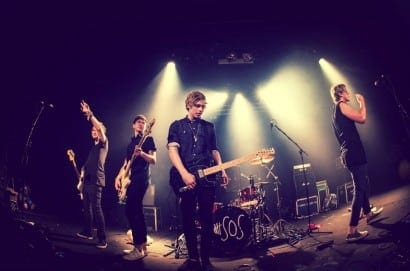 FOUR Sydney teenagers have been given the opportunity of a lifetime after being chosen by British boy band One Direction to be the opening act on their 2013 110 date world tour this year.

Pop-rock band 5 Seconds of Summer were discovered by One Direction member Louis Tomlinson after he saw the band perform on YouTube. The vocal support of Tomlinson led to the band receiving international exposure, with the boys relocating to London to record their first album late last year.

5 Seconds of Summer members Luke Hemmings, Michael Clifford and Calum Hood met while attending Norwest Christian College in Sydney’s western suburbs. They formed a band in late 2011 after being joined by drummer Ashton Irwin and began posting their performances on the internet, with their videos receiving over five million views and attracting a strong support in social media.

The band’s relationship with One Direction was sparked in November last year, when Tomlinson posted a video of the band’s original song Gotta Get Out on his Twitter page, sharing 5 Seconds of Summer’s music with his nine million followers.

Tomlinson tweeted: “Been a fan of this band for a while, everyone get behind them.”

The band signed a publishing deal with Sony ATV, and their first EP Unplugged reached third position on the iTunes chart in Australia. 5 Seconds of Summer have already had experience supporting international artists, touring Australia with Hot Chelle Rae and British pop-star Cher Lloyd in October.

5 Seconds of Summer have spent time with One Direction while on their song-writing excursion to London over the past few months, being visited by band member Niall Horan in the recording studio and playing football with Tomlinson and fellow band mate Harry Styles. Horan said yesterday that after One Direction members had discovered 5 Seconds of Summer on YouTube they “knew straight away they were very special”.

Guitarist Michael Clifford said that the bands loved ones were excited to learn that the teenagers would be joining One Direction on tour, although their mothers had been more concerned about whether or not they had eaten. He said that the band were still getting used to the idea that they would be spending the next eight months on tour with one of the world’s most popular bands.

Clifford said: “None of this has sunk in for us; it’s surreal to think we will be on the same bill as a band who are on such a world-wide scale. When the guys first started talking to us about it, we thought they were joking. And now I look at my calendar in my iPhone and it goes from `doing our thing, doing our thing, four shows at the O2 arena in two days! It’s crazy.”

5 Seconds of Summer will play to an estimated 1.3 million people while on tour with One Direction, travelling throughout the United States of America, Europe and Australia. The 110 date Take Me Home tour will commence at London’s O2 arena on 23 February.