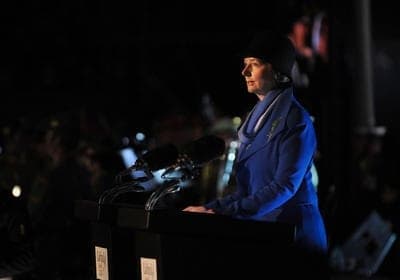 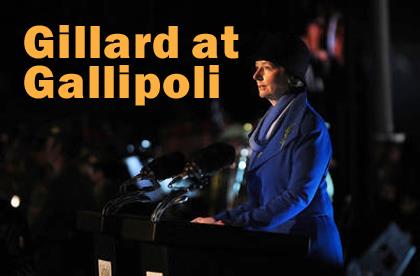 ONCE foes, Australia is now indebted to its Turkish “friends” for helping maintain a lasting Anzac legacy, said Prime Minister Julia Gillard in her address at Anzac Cove

On a clear, still, Turkish morning, Ms Gillard paid tribute to the 8700 Australians who died during the Anzac campaign, describing how, so far from home, they and their comrades “longed for the shape and scent of the gum and the wattle”.

“So this is a place hallowed by sacrifice and loss. It is too, a place shining with honour, and honour of the most vivid kind,” Ms Gillard said.

“A place where foes met in equality and respect and attained a certain nobility through their character and conduct.”

Some two-thirds of the 130,000 fatalities during the campaign were Turkish but there was no lasting animosity between opposing sides, Ms Gillard said.

“The Turkish honoured our fallen and embraced them as their own sons,” she said.

“And later they did something rare in the pages of history – they named this place in honour of the vanquished as Anzac Cove.

“We therefore owe the Republic of Turkey a profound debt. No nation could have better guarded our shrines or more generously welcomed our pilgrims.

“A worthy foe has proved to be an even greater friend.”

Among the Aussie visitors to hear from Ms Gillard during her first Gallipoli Anzac Day service as leader, was Townsville’s Naomi James, 30.

“We’re here just to pay our respects,” said Ms James, a passenger on one of the hundreds of coach tours.

“I’m ex-Army and have just been inspired by, especially the events recently, to come and pay our respects to people that died here for us.

This year’s Anzac Day follows the deaths of eight Australian soldiers in Afghanistan in the past year – one quarter of the 32 deaths in the past decade.

At a service where The Last Post was played beside calm waters, Ms Gillard said the Anzac legacy will never be forgotten.

“Now and forever, we will remember them.” – AAP