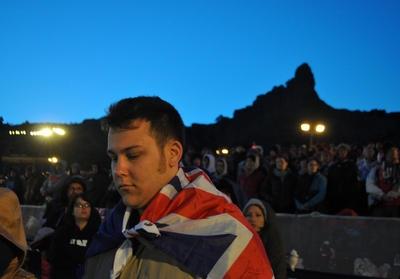 Speaking to reporters after her address at the Anzac Day dawn service at Gallipoli, Ms Gillard was asked if April 25 was the country’s most important day.

“Australia Day is an important day, too, but I think that as an event that stirs the emotion, that means we get lumps in our throat and tears in our eyes. It’s Anzac Day that has that significance for each of us and for all of us.”

Attending her first series of Anzac Day services in Gallipoli as leader, Ms Gillard said she felt moved by the experience.

She rejected a proposition that Anzac Day was not representative of all Australians.

The prime minister will speak during a service at Lone Pine, where many Australian lives were lost during three days of battle in August 1915.

During the Anzac campaign, some 8700 Australian lives were lost.

IMAGE: An Australian draped in the national flag pays his respects to the soldiers who died at Gallipoli, during the Dawn Service at the Anzac Commemorative Site in Gallipoli, Turkey, Wednesday, April 25, 2012. (AAP Photo/Thea Cowie)