A moving service at Westminster Abbey was a fitting end to a day of tributes for Anzac Day 2013 across London. Earlier ceremonies at the Australian and New Zealand War Memorials at Hyde Park Corner and the Cenotaph at Whitehall were well attended by expat Antipodeans honouring those who have sacrificed their lives in conflict. 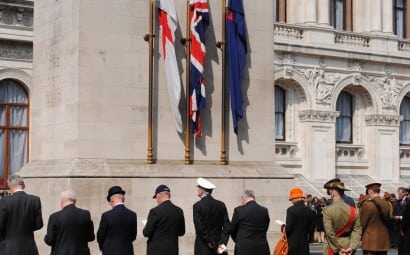 AS THE bells rang out from Westminster Abbey at 1pm today, it marked the end of a morning of commemorative events held around London in honour of Anzac Day.

Thousands of Australian and New Zealand expats gathered at various locations throughout the city to pay their respects to the service of our soldiers past and present.

The day started with a dawn service at the Australian memorial at Hyde Park corner, where over 3000 gathered to mark the occasion.

The service was attended by Australia’s opposition foreign affairs spokeswoman Julie Bishop and the Duke of Kent, who laid wreaths on the memorial during the ceremony.

The ceremony was followed by a wreath-laying at the New Zealand war memorial diagonally opposite and a presentation of the traditional Haka.

Following the ceremony many made their way to a number of breakfasts hosted nearby, before heading off for a full day at the office.

Others continued on to the Cenotaph at Whitehall to attend a wreath-laying ceremony at 11am. Whitehall was closed to traffic as crowds gathered to pay tribute to serving and past servicemen and women and relatives taking part in the parade.

The ceremony was followed by a moving one hour commemorative service at Westminster Abbey, with expat Australians and New Zealanders filling the church to honour those who lost their lives at Gallipoli, and in conflicts since.

The reverend paid tribute to the great loss of life of the ANZACs  at Gallipoli, acknowledging the death toll was significant to the two countries involved.

“Anzac Day is a time when people remember those who fought and died in Gallipoli, the two World Wars since and other conflicts of the 20th century,” he said.

“What led so many young Australian and New Zealanders to enlist and sacrifice their lives,” he asked before contemplating it may have been a thirst for exploration and adventure, a need for excitement or a sense of loyalty to relatives, kith and kin and a desire to serve their country.

We must remember those who gave their lives in service of friends, comrades and country so we might be free to live now, the Reverend said. It is a challenge and call to each one of us to give to others, and not count the cost.

The address was followed by an act of remembrance, as the Last Post sounded out through the Abbey.

It was a fitting end to an important day of remembrance in London.

“They shall grow not old as we that are left grow old:
Age shall not weary them nor the years condemn.
At the going down of the sun, and in the morning,
We will remember them.