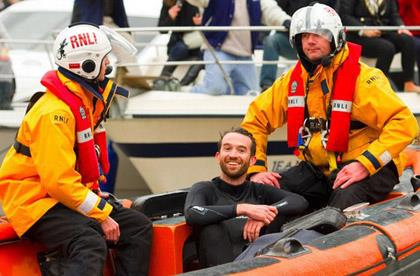 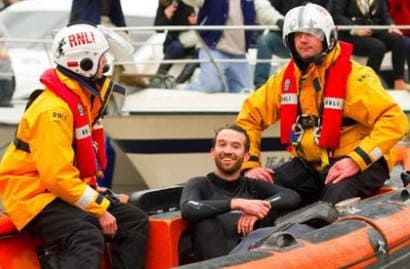 The 36-year-old London-based activist must sweat it out for the next three weeks with his sentencing due on 19 October.

A 12-person jury at a west London court ruled unanimously against him after he deliberately swum in front of the two crews and forced the race to be delayed by 25 minutes.

Judge Anne Molyneux said Oldfield could be put behind bars next month.

On hearing the guilty verdict, Oldfield’s face tightened a little at Isleworth Crown Court and he stroked his beard as he came to terms with the decision.

He joked with a guard as he left the box and hugged his wife, Deepa Naik.

Oldfield said in court on Tuesday that he was protesting against inequality in London and was tipped over the edge by the savage budget cuts in Britain.

He continued to defend his protest on Wednesday in a statement read outside court to the media.

“As inequalities increase across Britain and much of the world, so does the criminalisation of protest,” he said.

“My solidarity is with everybody working towards more equitable societies everywhere.”

After television journalists started hurling questions at him, the softly-spoken Oldfield and Ms Naik retired to the safety of the court centre.

The former Sydney schoolboy rower and book publisher avoided all further questions on exiting the court for a second time and made his way to a waiting taxi.

Earlier on in summing up, his lawyer Benjamin Newton said Oldfield’s actions had been an “anguished shout in the dark” and that he was not a “crank” or an “oddball” as prosecution lawyer Louis Mably had tried to portray him.

“The worst you could say about him is that he is misguided,” Mr Newton said.

Oldfield, who has worked heavily in social projects and with volunteer groups in the past decade in London, had not committed a criminal offence before jumping in the Thames five months ago.

Mr Newton said that an extra million viewers joined the BBC coverage in the UK because of Oldfield’s headline-making effort that caused a backlash in Britain.

“As a spectacle, far from obstructing the rights of the public, it in fact created a talking point at a sporting event without affecting the outcome,” Mr Newton said.

However Mr Mably successfully argued that Oldfield’s actions had spoiled the day for the viewing public.

“What he did, did not help anyone … unlike his professional work, it was an inconsiderate act,” he said. – AAP