A YouTube video claiming to be from Anonymous, threatened the Australian radio station responsible for the Royal prank call which lead to the apparent suicide of British nurse Jacintha Saldanha. 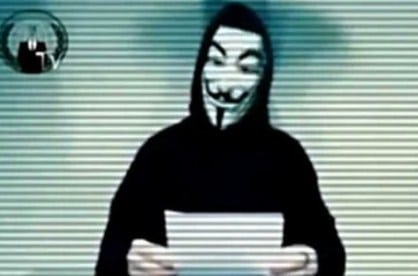 A video posted on YouTube purporting to be from the cyber hacktivist group Anonymous, threatened the Australian radio station embroiled in the Royal prank call scandal, involving the apparent suicide of British nurse Jacintha Saldanha.

The video addressing radio station 2Day FM, was posted by a user called An-onym Oz and received 33,635 views before apparently being taken down from YouTube wth a message posted in its place says it violated “YouTube’s policy on depiction of harmful activities”.

In the video, a person (pictured) wearing the trademark Anonymous Guy Fawkes mask, made famous by the film V is for Vendetta, and with their voice digitally disguised, reads out threats against 2Day FM and its advertisers – including hacking their databases.

‘‘Hello citizens of the world, we are Anonymous,” the reader declares.

“We have listened to your excuses. We have heard the word ’prank’ a million times

“We are Anonymous and hereby demand you terminate the contracts of Mel Greig and Michael Christian.

“We will not listen to any more excuses. We will not let you escape your responsibility. You have a funeral to pay for.

“We are Anonymous. We are legion. We are amongst you. Expect us.

“This is not a prank call; this is no laughing matter. This is your one and only chance to make amends. You have one week to do so.”

Bosses at 2Day FM have been asked to discuss a “variety of issues” with NSW Police regarding the radio station’s royal prank telephone call.

A police spokesman refused to say what issues have been discussed regarding the hoax call and the subsequent fallout, but the YouTube video threatening the station is believed to be among them.

Personal and cyber security has been stepped up at the radio station after the video was posted on December 8.

2Day FM, owned by Austereo, suspended all advertising on 8 December in the face of mounting advertising boycotts by its major sponsors such as Coles and Telstra, as the backlash over the Royal prank call tragedy escalated.

There are real doubts though, about whether the video was actually made by Anonymous – a group that has in the past concerned itself with issues of freedom of speech.

But 2Day FM staff have taken the threat seriously.

“We are taking the Anonymous video and the safety of our staff seriously with the necessary security precautions,” a station spokesman told AAP.

“We are working with NSW Police regarding the nature of the content.”

A source said: “It’s been of real concern and unrest to Sydney staff members.”

The radio station earlier said it was working with the federal police but later clarified that it was NSW Police.

A NSW Police spokesman told AAP: “We’ve had a number of discussions with the management of 2Day FM on a variety of issues.

“It’s not appropriate to disclose the nature of these discussions.”

The “Anonymous” video appeared on December 8, the day after British nurse Jacintha Saldanha apparently took her own life.

She’d answered the prank call made by 2Day FM presenters Mel Greig and Michael Christian, posing as the Queen and Prince Charles, to the London hospital treating the pregnant Duchess of Cambridge.

IMAGE: Screenshot from the now removed YouTube video claiming to be posted by the Anonymous online vigilante group.