The Sydney radio station at the centre of a royal prank scandal has faced a diving share price and threats from cyber activists as its two under-fire hosts prepared have faced a round of television interviews. 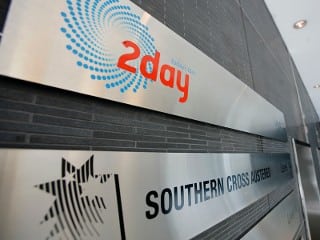 THE Sydney radio station at the centre of a royal prank scandal has faced a diving share price and threats from cyber activists as its two under-fire hosts have faced a round of television interviews.

Shares in 2Day FM owner Southern Cross fell almost eight per cent to $1.02 in Monday morning trade as all advertising remained suspended after Coles and Telstra pulled their ads.

Online activist group Anonymous posted a YouTube video calling on the station to sack hosts Mel Greig and Michael Christian, who have been in hiding since the suicide of a London nurse duped by their hoax but agreed to appear on all three free-to-air TV networks on Monday night.

“You have placed your advertisers at risk – their databases, their websites, their online advertising,” said a digitally altered voice on the video.

“We will not listen to any more excuses. We will not let you escape your responsibility… This is no laughing matter. This is your one and only chance to make amends. You have one week to do so.”

Station management defended the prank in which the two hosts posed as the Queen and Prince Charles in a telephone call to London’s King Edward VII Hospital last week and obtained private information about the condition of the pregnant Duchess of Cambridge.

Nurse Jacintha Saldanha, a 46-year-old mother of two, is believed to have taken her own life on Friday, three days after transferring the call to another nurse who divulged news about the duchess.

Rhys Holleran, CEO of Southern Cross Austereo, said the station tried at least five times to contact the hospital to discuss the pre-recorded prank before it went to air.

Mr Holleran said the company was deeply saddened by what had happened and was committed to helping any authorities wanting to investigate the matter.

“It’s a tragic event and one that we could never have foreseen,” he said.

“I can only say the prank call is not unusual around the world,” Mr Holleran said.

“That style of call, it happens every day in radio around the world. No one could have reasonably foreseen what has happened.”

Opposition Leader Tony Abbott said it was a “terrible tragedy” for all involved.

“It was a prank that went horribly wrong,” he told reporters in Sydney.

“I think it is important to let the dust settle before we rush into demands for more media regulation.”

“We should have a free media, but of course with that free media comes responsibility,” he said.

Communications Minister Stephen Conroy said the media regulator ACMA was considering whether to initiate its own inquiry, beyond the usual process of giving broadcasters the opportunity to respond to complainants.

Mr Holleran said he did not believe any ACMA codes governing radio broadcasts had been breached or that the station’s licence was in jeopardy.

But media lawyers said the station may have committed a criminal offence by recording the nurse without her consent and broadcasting the prank.

“There seem to be two issues,” Justine Munsie of law firm Addisons told the advertising and marketing website B&T.

“One is the potential breach of the NSW Surveillance Devices Act which makes it illegal to record telephone conversations without consent.

“The criminal offence is whether they should have been recording a telephone conversation with a person without their consent in the first place.” – AAP