You Ruddy beauty: Xavier Rudd back in London for one night only

Xavier Rudd took time out from his busy schedule to answer some questions from Australian Times before his gig at Koko, Camden on Wednesday.

by Lee Crossley
in Culture 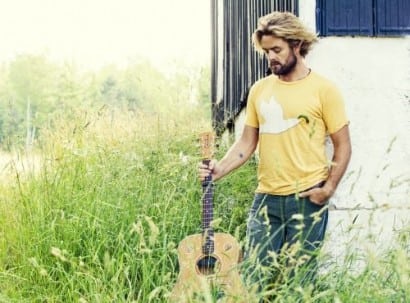 By Lee Crossley
MY first encounter with Xavier Rudd occurred by accident.

Falls Festival 2002. Fatigued and fed up with whinging mates and in need of a break from constant boozing I sought refuge in the tent on the hill.

I took a seat on the grass among strangers. A comedian, Greg Fleet, wondered on stage with a bleak and crude set of jokes that, from memory, wouldn’t have been fit for prime-time listening.

I was almost ready to re-join the ruckus that was my troupe back at camp when some roadies started setting up a most peculiar arrangement of instruments on the stage.

There were a number of didgeridoos, a stomp box, lap guitar, harmonica and several other strange contraptions capable of noises beyond my repertoire of musical vernacular.

What or who could this all be for? Intrigued, I lingered some more.

I asked someone who was on next. They told me a local lad — Xavier Rudd.

I’d heard the surname but it didn’t click. I played some footy with a ‘Ruddy’, Zac Rudd, in Uni Blacks Under 19s from down Geelong way.

Then I saw Zac up the front, getting ready for the gig. I later gathered that my former AFL team mate and this bloke about to get up on stage were brothers.

Xavier was only 24 then. It’s hard to believe that was a decade ago.

He played an unforgettable set, the tent swollen to capacity, rocking and swaying to his cool beats and rhythms.

I returned to my friends raving about this guy. No one believed me. He couldn’t have been ‘that’ good or he would have been on the main stage.

I knew what I had heard.

I went out and bought To Let, his debut album the moment I got home.

It was on repeat for a month.

Ten years have passed and Rudd, now 34 has seven albums to his name, two children and thousands of fans the world over — with a second home in Canada where he is considered an independent superstar.

He is in London this week, for the fifth time, rounding up the European leg of his tour to promote his latest offering – Spirit Bird.

Rudd took time out from his busy schedule to answer some questions from Australian Times before his gig at Koko, Camden on Wednesday.

How has your music changed/evolved since those days of To Let and Falls on the hill in the Comedy tent?
My music still comes from the same place. There has been a lot of shows all over the world since then and a lot of knowledge gained. You learn to hone your craft and so, sonically things improve but the essence of the energy of the music has always been the same.

How have you changed, and how has that influenced your music?
Ten to twelve years on this amazing journey has taken me through some high highs and low lows. Lots of wisdom constantly gained, amazing people/places/organisations, all of it influences the music.

You are certainly more well known since you were back then… what is your attitude to the ‘fame’ thing… how do you deal with the attention?  Do you like it or are you a private person?
I think we all grow and change through our lives and everything we do adds certain rays of light to that change. My music has always come from the same place no matter what, I never change it because of how people might perceive it, it comes from my heart and I like to keep it pure and true. I respect my music as I do my grandmother. The rest of it is what it is, I appreciate people acknowledging what I do, but I like to escape from the who-haa still and live privately.

With increased popularity comes the risk of being considered as ‘mainstream’. How do you maintain your independence and keep the commercial radio demons at bay?
There is no choice, I don’t get played on mainstream radio and I am independent with a solid world wide support base – I’m proud of that – wouldn’t change a thing.

How many instruments do you play during a typical set?
About 10 to 15.

Your latest album Spirit Bird is your seventh… describe this album with regard to themes, messages and general vibe.
People can expect to hear familiar tones for sure, but I have used some new ideas for this record and created some interesting sort of tribal grooves, I have sampled about 25 species of Australian birds through the album and also some whales and other sounds.

Where does your London visit fit in with your Spirit Bird Tour, start or middle? I see you have a truckload of dates ahead of this show… does being on the road tire you or energise you… what is your attitude towards touring?
[The London gig is the] End of the European tour. Then after the UK we still have the Australian, Canadian and US legs to go.

What are you expecting from your gig at Koko? Have you played there before?
I will be basically playing lots of stuff from the new album mixed with some older stuff people wouldn’t have heard for a long time.

How many times have you visited London before? What are your thoughts about playing in the middle of the Olympics? Do you even like sport? What are your thoughts about the Games generally?
I’ve been to London about 4 or 5 times. It’ll be interesting to be there while the Olympics are on. Yep, I like sport. Some of the Aussie team are coming along, I think.

Tickets from £22.50 can still be purchased for Xavier Rudd, supported by Josh Kumra, at Koko Camden on Wednesday 8 August. Doors open 7pm.