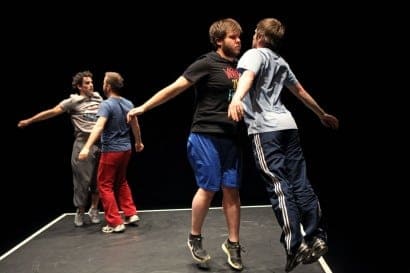 A WHITE 3×3 square marked out with white gaffer tape acts as a petri dish for this theatrical experiment. One at a time, each of the four male performers stands in the square and responds to a list of the same instructions. Two of men are trained dancers. The other two have no movement training at all.

Lucy Guerin’s Untrained at the Southbank Centre is not simply let’s put a couple of blokes on stage and see how silly they look, nor is it a vain attempt to prove how gifted professional dancers are compared to those with two left feet.

As Lucy Guerin, Artistic Director of Australian dance company Lucy Guerin Inc.  explains, this show is a comparative study of the connections made between the mind and the trained body, compared to the untrained.

“Watching people without training attempt choreographed movement,” was an area of interest for Guerin.

“I know it’s amusing, but that wasn’t my primary reason for wanting to explore it,” she tells Australian Times.

“I actually find it really quite fascinating to watch how that thought process works and how it expresses itself in an untrained body compared to a trained body. And what it is that training does to us.”

The instructions each performer must execute range from doing a handstand or a certain type of choreographed jump or turn, to making faces or acting out a scene from a movie.

There are also tasks that tell the audience more about the men themselves — they might be asked to speak about their lives, or what they have noticed about each other.

How the performers respond to the instructions is mostly improvised.

“There’s this amazing spontaneity. They [the untrained performers] don’t think about something and then do it, it just sort of happens, and then they think about it afterwards,” says Guerin.

“That kind of immediacy and lack of self-consciousness and lack of awareness of their bodies in space, is a different movement approach to what dancers do. 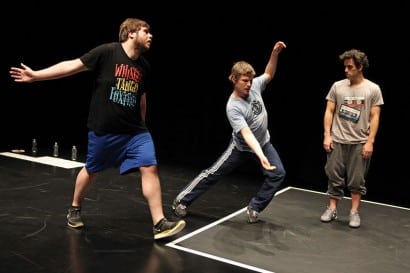 To achieve this spontaneity, Untrained had a very short rehearsal period. Five days.

Furthermore, the cast is regularly updated to ensure the untrained performers remain untrained.

“Over time the untrained become very familiar with the work, and they become a bit trained and so we have to keep rotating them.”

The cast starring in the London shows have only performed the show once before.

Auditions for the untrained dancers were held in Melbourne last year (see video below). The men who attended wanted to try “something different, something beyond the known parameters of what they do in their daily life.”

“They are generally looking for some experience that is going to extend, and take them somewhere else, beyond what they’re familiar with,” says Guerin.

Following performances at the Dublin Dance Festival and at The Firkin Crane in Cork, Untrained will continue its tour with performances at the Athens and Epidaurus Festival, followed by two nights in the Purcell Room at the Southbank Centre in June.

“It starts off with a lot of laughter, but the laughter becomes very supportive of these guys so they’re not being laughed at, but it’s much more laughing with them and with their attempts.”

However, as Guerin illustrates, there is much more to the show.

“For me there’s something in this show that supports this idea of not trying to reach this perfection, but seeing what’s involved in the process of trying something, is just as important as the outcome.

“It’s very clear that they’re finding it hard and not succeeding. As an audience it’s just as interesting, and almost more interesting than watching someone come out and do something perfectly and not show the effort and the difficulty.”

Untrained will make you laugh, cheer and inspire you to not simply step, but pirouette out of your comfort zone.

Lucy Guerin’s Untrained is on 5-6 June at the Purcell Room at the Southbank Centre. For tickets visit southbankcentre.co.uk.

Watch the auditions for Untrained here: