KRIS GRIFFITHS is blown away by Australian guitar god Tommy Emmanuel at The London Forum. 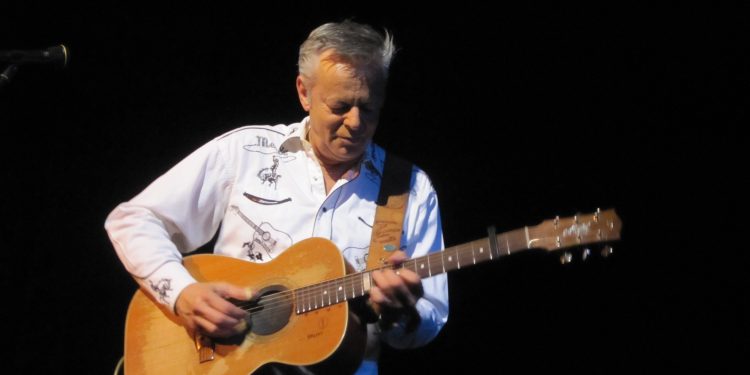 NO sooner had evening descended on the royal wedding day in London than guitar legend Tommy Emmanuel was taking to the stage for his very own party at the Kentish Town Forum.

After thanking the healthy Anglo-Australian crowd in attendance, he proceeded to show us all exactly why his gigs are always worth the entrance fee.

Armed with only his trusty, battered acoustic to begin with, Tommy set the standard with a series of lightning-fingered solo numbers plus his legendary trademark Beatles medley, simultaneously playing basslines and lead melodies with the ease of a pianist playing Chopsticks.

By the time his band had graced the stage the crowd were ready for the next level of performance, and Tommy’s troupe were certainly able. As their arrangements became more progressive and in parts ‘rockier’, with some of the rhythm tracks sounding not unlike 70s-era AC/DC, Tommy leapt around like a twenty year-old rocking his first gig, belying the fact that this is his 50th Anniversary World Tour.

Then it was back to solo, with some more serene renditions including Moon River and Michelle, before the band re-entered for an epic finale complete with extended solos by each member. There was never any doubt who the star of the show was though, and despite sometimes wishing he’d lay off the cheesy monologues, the overriding response is he can do whatever he likes when his fretboard magic can spellbind so effortlessly.