Breathtaking is an understatement; Knee Deep by Casus

REVIEW | Four circus performers test the limits of human strength and fragility in Knee Deep, the debut for Australian contemporary company Casus currently playing at the Riverside Studios in Hammersmith. 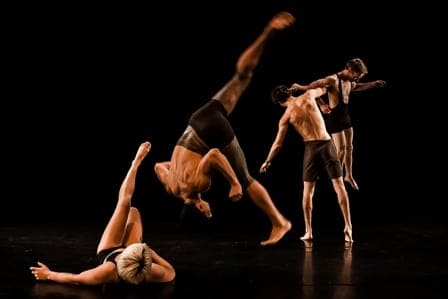 KNEE DEEP opens with a different take on tightrope walking. Instead of rope, the walker steps barefoot on cartons full of eggs. The audience watches her weight shift from carton to carton with the same anticipation as if she was balancing on a high wire. Cameras project close-ups of each delicate footstep, magnifying the fragility of this display.

It is the start of a highly original, often quirky, and breathtaking show. It reminded me not to take any part of my body for granted.

Performed and created by Casus, an Australian circus quartet founded in 2011, their debut show tests the limits of what it is to be human. Emma Serjeant, Jesse Scott, Lachlan McAulay and Natano Fa’anana use every inch of their bodies to produce new and seemingly impossible ways to connect and move each other. 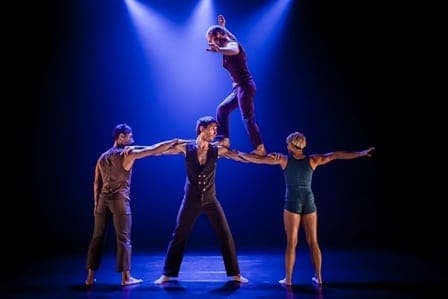 Instead of props and equipment, heads, hands, forearms, kneecaps, and on one occasion, the upper jaw, are used to lift a performer.

Heightening the risk involved is the pace with which the acrobatics are performed. They are executed so quickly. Consequently this rapidness does not allow for the audience to applaud as much as you would like. Each feat is followed quickly by another, with no time to waste.

Even as a spectator, this show is physically relentless. Scott walks the stage on clenched toes. Serjeant hammers a nail into her nostril. Scott and Fa’anana hold onto McAulay’s hands and feet swinging him 360 degrees. And to further demonstrate how the human body is the most versatile apparatus, Fa’anana turns himself into a percussion set, mixing sounds and rhythms by slapping different parts of his bare skin.

The show also includes a number of aerial items. The best is the finale, a trapeze act involving all four performers. Their incredible teamwork and strength is showcased as they interchange between holding someone and being held. At one point all four use each other’s bodies to hang from the trapeze. It is awe-inspiring.

Following on from performances at the Brighton Festival, this show is currently playing at the Riverside Studios until 22 June. Casus will then continue touring the UK, with a series of shows at the Galway Arts Festival and the Edinburgh Fringe Festival.

Knee Deep is on at Riverside Studios, Hammersmith from Tuesday — Friday at 7.30pm, Saturdays at 5.30pm and 7.30pm and Sundays at 6.00pm. Tickets are £20-30, available from Riversidestudios.co.uk.