Australia’s Back to Back Theatre reclaims the swastika

After a successful tour in Europe, Geelong-based theatre company Back to Back are back in Australia but still looking to reclaim the swastika with their elephant-headed deity and a theatre group of stars.

by Will Fitzgibbon
in Culture 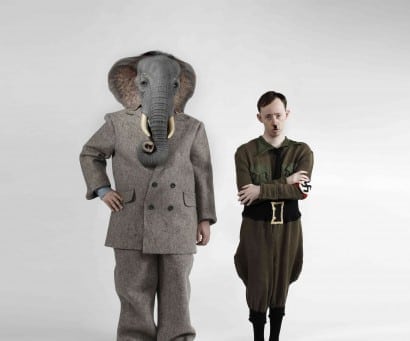 BACK TO BACK Theatre Company is returning to Australia after touring its current production across Europe, including a performance at the Barbican Centre in London from 28 June to 1 July.

Back to Back, a Geelong-based theatre group with a well-filled trophy cabinet, features performers who are perceived as being disabled. The current production, Ganesh and the Third Reich, is a complex and fanciful tale of the elephant-headed Hindu deity visiting 20th Century Nazi Germany to reclaim the swastika, the ancient Hindu symbol of well-being and luck misappropriated by a murderous failed artist from Vienna.

Since it premiered in Australia in 2011, Ganesh and the Third Reich has been touring globally throughout 2012, including stops in the USA and in London. Critics praised the performance and the company received a Melbourne Festival Age Critics Award in 2011.

The core six actors who make up Back and Back – all intellectually disabled – are used to leaving their home at Corio Bay for far-flung destinations — they have travelled to at least 47 cities across the world in the past five years.

That those with disabilities are excluded from mainstream society, and that this exclusion has the potential to create a distinct artistic vantage point, is a strong theme in Back to Back’s work, including the production of Ganesh and the Third Reich.

Certainly, the fact that a talented troupe of intellectually disabled Australians would choose to represent on stage a regime that killed an estimated 275,000 disabled persons during World War II is spine-stiffening stuff in itself. Yet Ganesh and the Third Reich goes beyond this simple clash of history; the play also asked the audience to question the morality of artist and artists in using a subject as dark as Nazism for creative ends.

Back to Back Artistic Director, Bruce Gladwin, spoke to Australian Times about the London performances.

“The work is written from the hearts and the minds of the actors,” says Gladwin, who sees the personalities and interests of the Back to Back performers are central to the company’s art.

Having led the company’s artistic vision since 1999, Gladwin has seen the Back to Back’s reputation grow and it move from disabled theatre to theatre pure and simple.

“We were very trend-setting 25 years ago,” says Gladwin. Today, however, “critics no longer view it as a benevolent exercise but as art”.

Gladwin believes that fearlessness and a desire to challenge complexity is central to the artistic outlook of Back and Back and to its success. Complex theatre performed by disabled people, says Gladwin, initially strikes some as a paradox.

Given Back to Back’s success at home and abroad, it is surely a paradox worth maintaining.