Currently at the Finborough Theatre, Fishskin Trousers is a play about three lost people from different eras. Brett Brown, a young Australian actor stars as a scientist, stationed on the mysterious island of Orford Ness during the Cold War. 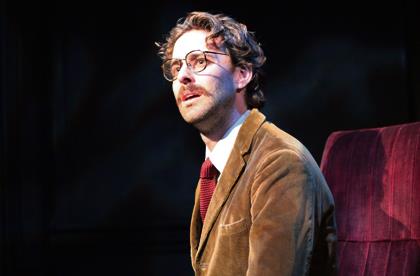 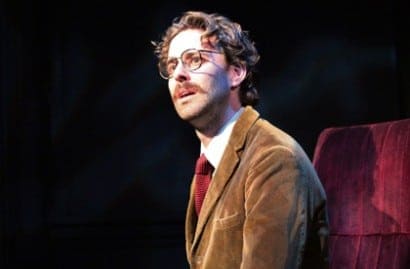 FOR Australian actor Brett Brown, playing a character from Australia is a stretch. Whilst studying at London’s Royal Academy of Dramatic Art (RADA), Brett lost his native accent through the formal voice coaching. So when he was cast as Ben in Fishskin Trousers, a new play by Elizabeth Kuti, he admits, “I almost had to re-learn the accent.”

Since graduating from RADA where he received “very English training” heavily based on the classics and Shakespeare, Brett has continued to master this style of theatre. His credits include performances with the Royal Shakespeare Company, La BohÃ¨me with OperaUpClose, and a one-man production of the Greek tragedy Phaedra.

For Brett, acting in this new, more contemporary show “was bit of a learning experience”.

“It was fun for me rediscovering those personalities and those character traits so present when I was growing up.

“He [Ben] is very Australian, which is part of his charm. He’s not really a larrikin, but he’s very chipper. And he’s almost exotic in a strange way. He’s just so different, and thinks in a different way to the English. And he has a different relationship with England, where the play’s set.”

Fishskin Trousers weaves together the stories of three characters from different eras. Each of them is connected to Orford, a fishing village in Suffolk. From the twelfth century Mab (Jessica Carroll) gives an eyewitness account of the legendary Wild Man of Orford, a half man, half fish type creature caught in the nets of fishermen.

Eight hundred years later at the height of the Cold War Ben, a radar expert, hears strange noises on the mysterious island Orford Ness as he tries to fix the radar system, which is monitoring the Russians. Mog (Eva Traynor), in 2003, returns to the island where she grew up, and is faced with a heartbreaking decision.

“It plays with the idea that time, rather than being linear is more balloon like,” Brett says.

“All the characters exist without realising it in the same time and in the same place, but in different centuries. So this idea that things that happen don’t get erased, but stay, looping.”

The play is structured around this loop. As it turns from one era to the next and then back again, the audience begins to realise all the connections between the stories.

“What’s interesting is when the characters choose to either tell the truth or withhold the truth from the audience. So the interplay between the audience and characters becomes really dynamic and tense.”

Though the characters are fictitious, the locations discussed within the play, including a 12th Century castle, still exist. To research for the role, Brett visited Orford.

“It’s a really weird place. The radar system is in the distance and you can’t go near it. There are all these crumbling Cold War buildings. And it’s so flat it almost feels claustrophobic. There’s not this undulating lovely landscape. It’s just flat. And then the sea stretches out, and you can’t tell the difference between the sky and the ocean. It’s quite mysterious.”

Fishskin Trousers was originally staged at the RADA Festival, where it enjoyed sold out performances. Since it opened at the Finborough Theatre, it has received highly favourable reviews.

“The audience love the fact they have to piece it together themselves. They love that jigsaw nature of the stories, and find it quite rewarding that they have to really engage.”

Brett also finds the experience of performing in this type of show gratifying.

“I love the live element of theatre. Particularly in a play like this where it is so dependent upon your relationship with the audience. It’s not just like we’re going to present something to you. This is more, we’re going to share something with you, which is very different,” Brett says.

Fishskin Trousers is at the Finborough Theatre until 28 September 2013. To book tickets visit Finboroughtheatre.co.uk or call 0844 847 1652.