Australian BMX rider Lauren Reynolds has put in a confidence boosting performance in London at the recently held BMX test event as part of the London Prepares series.

by Liam Flanagan
in at, Sport 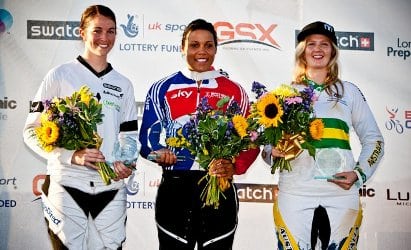 AUSTRALIAN BMX rider Lauren Reynolds has put in a confidence boosting performance in London at the recently held BMX test event as part of the London Prepares series.

Over a rain affected weekend, the 20 year old West Australian recorded the second fastest time in the time trials before taking the bronze medal in the Elite Women’s Final behind winner Shanaze Reade of Great Britain and New Zealand rider Sarah Walker.

“The rain made the track really muddy and soft in some areas. Luckily the track builders were prepared and covered the track at times when needed.  The wind really made things dangerous and caused a lot of accidents,” Reynolds told Australian Times.

“I was really pleased on the whole with the weekend. I had two solid consistent time trial laps on Friday and backed that up with a third place in the racing on Saturday. It gives me great confidence with the Games just one year away.”

The event, doubling as the third round of the UCI BMX Supercross World Cup series, was not without controversy with many riders complaining about the conditions of the Olympic track. Gold medalist Reade claimed, “for the females, the track is on the limit when the wind changes, it’s fantastic we all came through and the British crowd were great, but there’s a little work to be done.” 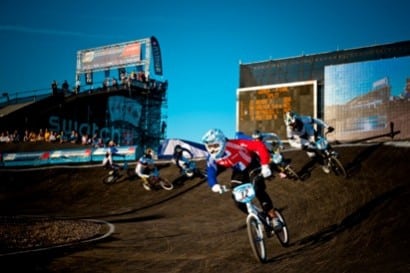 Despite the concerns over the track, Reynolds’ ambitions are clear for what would be her first Olympics.

“I’ve always set my sights high so I will be going for gold. Realistically I believe it is achievable, but I also know what the sport is like and things do happen. So ideally I am going there to do my best, and get a medal for Australia.

“Everything is really going well and I’m on track. We know the areas that need some work, and having some good racing and results at this year’s test event, and getting a look at the track means we can now really focus on key areas to work on.”

With BMX making its debut as an Olympic event in Beijing in 2008, Reynolds is excited about the growing popularity of her sport.

“The sport is catching the eye of media more and more, the crowds seem to be growing and I believe the amount of young kids coming through the clubs is growing, so I think it’s great. We just need to keep a professional image for the sport and attract the right people in the right ways and BMX will go really far. It has a lot to offer — more than a lot of people realize.”

In the Elite Men’s final, despite being widely tipped to win the event, South Australian Sam Willoughby finished sixth.