Four hours standing in chilling, wet conditions to watch the Queen's diamond jubilee pageant paid off for one young Australian whose day warmed up when she spied a dashing Prince Harry.

by AAP
in at, News 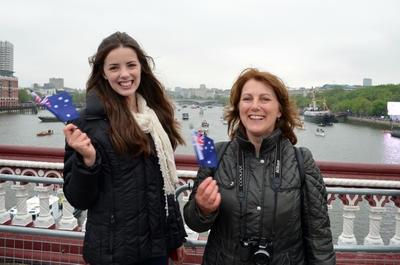 FOUR hours standing in chilling, wet conditions to watch the Queen’s Diamond Jubilee pageant paid off for one young Australian whose day warmed up when she spied a dashing Prince Harry.

Morag Hutcheson, 14, from Canberra had a prime – albeit unsheltered – position on London’s Blackfriar’s Bridge on Sunday to watch the spectacular Jubilee procession of more than 1000 vessels that meandered down the River Thames in honour of the Queen’s 60-year reign.

“We saw Harry. He’s pretty fit,” said a beaming Morag a short time after the royal barge, the Spirit of Chartwell, passed.

“I was waving my hands; he was standing outside on the top of the boat.”

The 27-year-old prince joined his grandmother the Queen, Prince Philip, Prince Charles and Camilla, and the Duke and Duchess of Cambridge on the royal barge, which inspired a roar of applause and waving banners as soon as it came into sight.

Among a sea of Union flags was a scattering of Australian emblems, and cries of “Go Australia” could be heard as surf lifesaving boats rowed by a team of dedicated crews from Down Under powered through London’s murky waterway.

The English capital reached a maximum of 12C on Sunday, undoubtedly deterring some spectators who would have otherwise headed to the riverbanks. Nevertheless, crowds were still several deep at most vantage points along the 11km route.

“It’s a bit of a shame about the weather,” said Canberran David Black, adding that the temperature was reminiscent of winter in his hometown.

“I saw the royal barge, I saw the Queen and Princess Anne who was on another boat,” Mr Black said.

“I’ve seen the royals when they have come to Australia, but only very briefly and never this close. This is just incredible. I appreciate that it is such a monumental event.”