Lawyers hopeful of acquittal for Aussie in Malaysian drugs case

Lawyers for an Australian man facing drugs charges and a possible death sentence in Malaysia say they are optimistic about winning an acquittal. 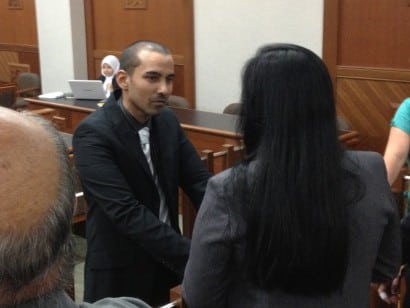 LAWYERS for an Australian man facing drugs charges and a possible death sentence in Malaysia say they are optimistic about winning an acquittal after it was revealed police made mistakes when carrying out crucial analysis work.

Dominic Bird has pleaded not guilty to two charges, the most serious of which relates to drug dealing and carries a mandatory death sentence.

He has also been charged with drug use.

The Perth man was arrested in a police sting on March 1 at Old Town White Coffee, a cafe on Jalan Dang Wangi in central Kuala Lumpur.

But on the first day of Bird’s trial at the Kuala Lumpur High Court on Monday, his lawyer Muhammad Shafee Abdullah slammed forensic analysis work carried out by police, saying they had failed to test a sufficient amount of the drugs.

Under Malaysian law, the police were required to test a minimum of 10 per cent of the contents of each package in which the drugs were contained.

The police forensics officer that carried out the test admitted to the court that just 0.07 per cent of the drugs was tested.

“What we have established actually is very critical.

“If a judge considers it properly, the whole charge should fall.”

Mr Abdullah said the analysis was “seriously flawed”, adding he was optimistic the “technical defence” could save Bird’s life.

“There is no such thing as a hopeless case. It depends on how much work you do and this is a case that is certainly not hopeless,” he said.

“It is a strong case from the prosecution from what they have hinted, but it is not a hopeless case. It is a case that we can defend.”

The drugs Bird had allegedly been carrying in a Mr Potato chips container when he was arrested were presented to the court on Monday.

A smaller quantity of drugs was also allegedly found at his address in Kuala Lumpur.

Despite the prospect of a death sentence hanging over him, Bird appeared to be in good spirits on Monday, smiling as he was reunited with members of his family, including his father and sister, as he was led into court in handcuffs.

Dressed in a black pinstripe suit and wearing a white and grey-striped tie, he spent the hearing with his father and sister, as well as a number of friends, huddled just a metre behind him.

His father and sister were allowed to join Bird for lunch in the courthouse after the hearing was adjourned.

The trial comes as Malaysia debates the use of the death penalty.

Mr Abdullah said he was hopeful at the very least, the “mandatory” rule would be eliminated.

“They are considering to either remove that first, or remove the death penalty altogether,” he said.

While it is likely the changes to the law, if made, would occur after Bird’s trial is completed, Mr Abdullah said they would probably be applied retrospectively, raising the prospect that his client would avoid execution even if convicted.

“When it matters about life and death, the powers that be will always apply it retrospectively,” he said.

The last Australian executed in Malaysia was Michael McAuliffe, who was hanged in June 1993.

A decade earlier, Kevin Barlow and Brian Chambers were arrested at an airport on the Malaysian island of Penang and charged with drug trafficking after they were caught with 141.9 grams of heroin.

They were hanged in July 1986 in Kuala Lumpur’s notorious Pudu jail.