MUSIC FROM THE MOTHERLAND | Some of the UK riot damage threatens to hurt smaller and independent music labels in Australia after the Sony music distribution warehouse in Enfield was burnt to the ground.

by Paul Judge
in at, Lifestyle 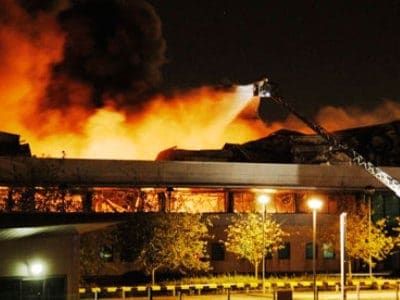 The riots and looting which swept London and other parts of the UK had a devastating effect on people’s homes, businesses and lives. Some of the damage threatens to hurt smaller and independent music labels after the Sony music distribution warehouse in Enfield was burnt to the ground (pictured) on the third night of the riots.

The warehouse housed stock for over 150 labels some of who lost all their stock and for others will cause delays as they try to maintain supply. This is a particularly hard blow for these small music labels. For years they have battled for survival against the larger music labels and the age of internet downloading.

Australian music fans can expect delays especially for special release imports, vinyl records and limited release albums. Touring bands will struggle with extra income as usual merchandise they might sell at gigs has been ruined and will take times to replace the available stock.

The Association of UK Independent Music has urged people to keep supporting these smaller labels which often are the only opportunity for upcoming bands and for fans of alternative music styles to see their music produced.

Of course it does! This might be a pretty obvious statement to make but it’s a message which the music community are pushing to remind people of the special place music has in their lives and can for everyone.

Forming in the UK in 2010 the campaign seeks to gather a wide scope of musicians, producers, performers and other people involved in the music industry to promote what is music means to them and how it makes them feel.

Music Matters has now reached Australia and New Zealand with the launch of the website last week. The site contains stories and videos from different songwriters including Paul Dempsey, Eskimo Joe and the Jezabels about how they discovered music and what it means to them.

The site also is working to establish guidelines and support for labels and companies which ethically promote and support the release of music and gives musicians a chance to earn a living from their music.

So yes, music matters; enjoy the impact it has on your life and support it, especially Australian music!

Its official, Victorians love their music.

Victoria v New South Wales, Melbourne v Sydney; this rivalry has been going on since they couldn’t decide where to put Australia’s capital and instead had to create the compromise we call Canberra. It doesn’t matter if its sports, arts, culture or fashion both sides and governments are always angling for the one up over the other while patriotic locals laugh at the idea of people wanting to live anywhere else.

For people who live anywhere else in Australia the competition seems a bit silly and also raises the question why would you want to live in either of them? We do love a competition though and this week’s points go to the Victorians, the category; live music.

A report commissioned by the Victorian government has found Victoria has the most live music venues with 600 across the state, 370 found in Melbourne. Concert goers average around two gigs a month and the live music industry is worth $500 million a year to the Victorian economy. A good enough reason for the government to announce a relaxation of the state’s licensing laws  to make it easier for venues to host live music and encourage more to get in on the act.

The most startling piece of data was 5.4 million Victorians went and saw live music last year opposed to 4.4 million who went to a football game. Does this mean in Victoria where AFL is a religion there is something which the locals love more? Surely not, but if it’s going to be anything live music is not a bad choice. Lift your game New South Wales.